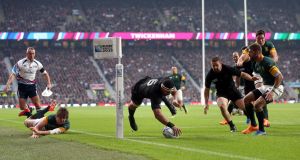 “It is not the mountain we conquer but ourselves,” - Edmund Hillary

For the ages. The greatest team of all time met an equal foe and survived. You would be hard pressed to convince any of this 80,090 Twickenham gathering that they had not just witnessed the World Cup final.

Some of the greatest players we will ever see were before our eyes and all of them delivered in a war that must rank high in the history of rugby’s most captivating and brutal rivalry.

The first 40 minutes belonged to South Africa but the total 80 were New Zealand’s. On first glance it was also a victory for the officials. There was a lot of marginal calls and Jerome Garces was constantly cajoling and commending his touch judges – “good job Johnny (Lacey)” he said for correctly calling Jerome Kaino’s early try and the input of TMO George Ayoub certainly denied New Zealand a much needed three points before half-time.

The All Blacks could have been out of sight by then. Handre Pollard did settle into his kicking duel with Dan Cater when Kieran Read got pinged for landing into the side of a lineout maul after just two minutes.

New Zealand came roaring back at South Africa, attacking with the most amazing angled running the game has ever seen, but the Bokke wall refused to crumble. Also, Willie le Roux was impervious under the bomb so Ben and Aaron Smith cleverly elected to go around them.

Off a static All Black maul, Joe Moody carried into midfield and when they switched back left Ben Smith fired a skip pass to Richie McCaw in the wide channel. Outnumbered, Bryan Habana shot up but McCaw basketball passed the ball into Kaino’s welcome embrace for a try in the corner that Carter converted.

They threatened to open the usual try-scoring floodgates before the rains came but South Africa refused to bend. Francois Louw, among others, but particularly the Springbok openside, made some game-saving turnovers in the face of unbelievable pressure.

Bloodied, he went off for six minutes of stitch and wrapping. The brutality of the collisions would have left Ireland’s 31-man squad needing Academy recruits. It was vicious, it was brilliant to see in the flesh.

This was sport at its complete zenith.

Then came important Ayoub interventions. Schalk Burger was penalised but not sin binned for a shoulder charge. They weren’t punished, however, as Carter’s penalty hit the post.

More drama followed. As JP Pietersen opened his legs for a 90-metre intercept try, off Ma’a Nonu’s pass, Garces was racing across the field to signal a New Zealand penalty.

Ayoub disagreed, highlighting a neck role by Moody on Duane Vermeulen so Garces reversed the penalty. Frustrating for the Bokke crowd but the correct call was made.

This was when the game’s momentum shifted in the Springboks’ favour. It was certainly a game of equals and definitely looked like they could make a third World Cup final when Kaino got sin-binned on 38 minutes.

The brilliant blindside tackled Fourie du Preez and seemed to be accidentally offside as he retreated around the ruck but Garces looked at the replay and deemed his toe poke of the loose ball to be “deliberate”.

Pollard’s resulting penalty, four from four, made it 12-7 at the turn.

He remains the master.

Next, Twickenham was electrocuted by more brilliant Ben Smith fielding and a half break by Nehe Milner-Skudder (forced off soon after and replaced by Beauden Barrett who went to fullback and Ben Smith to right wing).

The All Blacks knew their time had to be now and lifted their intensity to freakish heights.

Nonu rewarded unreal forward pressure with his last act of this semi-final. Aaron Smith went wide to Carter who fed Nonu in a two on two situation in the wide channel. His arcing, darting run tempted Pietersen off his wing, despite Damian de Allende screaming at him to stay wide on Barrett. Nonu made him pay.

Carter nailed the touchline conversion as Sonny Bill Williams entered the fray and just as Habana was yellow carded for cynical play.

It was not over. South Africa won a scrum penalty that Pollard landed to make it 17-15 but within two minutes Carter nudged the All Blacks five clear again after Eben Etzebeth was done for going off his feet.

Heyneke Meyer responded by launching 193 caps from his bench in the imposing shapes of Victor Matfield and Jannie du Plessis.

Matfield quickly became the latest ruck cleaner to fall foul of the TMO for a neck roll. It proved a fatal indiscretion as Pollard was lining up a long-range penalty. Garces literally took the ball off the tee to allow Carter put New Zealand deep into enemy territory.

Pollard was forced off so it was up to Patrick Lambie to gift us a tense last 10 minutes after Read coughed up the same penalty he conceded in the opening seconds, when delving into the Springbok maul from the side.

Lambie made it a two-point game. The ancient stadium heaved and groaned, the stress palpable.

The rain teemed gently down. The weather, the players, the officials, the crowd were all participants, one living breathing organism.

Sam Cane fumbled the greasy pill as New Zealand once more stormed into the Springboks 22. Urgency now, Matfield shifted it wide to allow Le Roux belt it 80 metres down field. Carter got across to sidefoot it into touch. The All Blacks resisted South Africa’s last driving maul, Aaron Smith stole the ball yet sliced it into touch. Matfield couldn’t grab the lineout so play inched back into South African territory once again.

Territory was always going to win this game. The last Springbok knock on came with 80.38 on the clock as we all witnessed the delivery of true collective greatness.