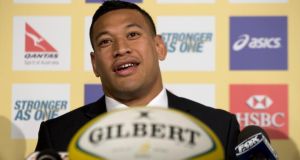 Australia’s Israel Folau has signed an extension to his national contract until the end of 2018. Photograph: Reuters

Michael Cheika may have become jaded by jokes about being the saviour of Australian rugby but he could afford to bask in the soft glow of pride on Wednesday as he delivered Israel Folau to the promised land for another three years.

With a post-World Cup player drain set to weaken Wallaby stocks, retaining dual international Folau until 2018 was vital for the Australian Rugby Union, which has been beset by financial problems and battered by scandal.

In 2013, Cheika was instrumental in bringing Folau across to his New South Wales Waratahs, when the player was depressed by his ill-fated two-year stint in Australian Rules football.

Former rugby league star Folau’s brilliant adaptation to the 15-man code brought disillusioned crowds back to Waratahs home games in Sydney, where they marveled at the explosive back’s power and flair.

Folau’s early appearances for the Wallabies also seemed touched by the divine as he notched a joint-record 10 tries in a debut season, including a brace in his first match against the touring British and Irish Lions.

The duo celebrated a maiden Super Rugby trophy at the Waratahs last year, the Sydney team’s success in the southern hemisphere tournament a shining light in a gloomy year for Australian rugby.

Cheika, who delivered Irish side Leinster their maiden Heineken Cup trophy in 2009, laughed off jokes that he had saved Australian rugby from itself with his Sydney success.

Months later, the jokes wore thin when he was hurriedly installed as Australia coach less than a year ahead of the World Cup to take over a team riven by scandal.

Kurtley Beale, one of Cheika’s charges at the Waratahs, had inadvertently sparked the resignation of former coach Ewen McKenzie when he sent misogynistic text messages to his team mates about a female staffer.

Cheika took flak for recalling the disgraced utility back into his Wallabies team for the season-ending northern hemisphere tour and the coach’s halo slipped further when they lost most of their matches coming to grips with his game-plan.

His tenure at the Waratahs ended in disappointment on Saturday, their title defence halted in the semi-finals by inspired New Zealand opponents, the Otago Highlanders.

On Wednesday, Cheika could comfort himself that he had secured a bigger prize for Australian rugby.

“Michael Cheika has also created a team environment which players really want to be part of, and that for me was one of the most important things when weighing up my future,” Folau said of his mentor.

It may just be coincidence that all three have had Cheika breathing down their necks at the Waratahs, though a relaxation of once-stringent eligibility requirements for national selection is likely to have played a part.

To try to stem the flood of players chasing more lucrative deals overseas, the cash-strapped Australian Rugby Union has tweaked its rule that requires Wallabies hopefuls to put in a full domestic season.

Seasoned veterans with 60 caps can play overseas and remain eligible, while a privileged few, like Folau and Foley, have been granted “flexible” contracts that allow them to pad out their income with stints in Japan.

Ranked sixth in the world, Australia head into World Cup warmup tests at their lowest position since the rankings were introduced more than a decade ago.

They face an uphill battle merely breaking out of their ‘group of death’ in England where they have been drawn in a pool with Wales and the hosts.

Delivering Australia a third trophy at the global showpiece may be beyond both master-coach and messiah but in securing Folau, Cheika has given Australian rugby hope of a post-World Cup future.