Matt Williams: Breathless Irish left to rue one that got away 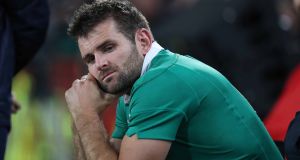 Playing the Springboks, on the high veld of South Africa, in the oxygen depleted air of Ellis Park, is one of rugby’s greatest challenges.

If your team does “the impossible” and wins in Johannesburg, you will enter into a pantheon of a few legendary men who have journeyed to the high veld and won.

Ireland’s name and an historic series victory in South Africa should now be on that august list. If last week’s first Test victory in Cape Town was snatching an against the odds win, the second Test at Ellis Park was grasping defeat from the jaws of victory.

When Jamie Heaslip touched down after a driving maul at the hour mark, Ireland were leading 26 -10 and on top in every department.

The old school Munster rugby tactics of kicking high and deep across the field from Paddy Jackson, with an energetic and aggressive green chasing line, had the South Africans rattled.

The South African attack was imprecise. The errors and frustration continued to mount within the Springbok camp.

As we witness so often in rugby, everything then changed. The Irish defence, which had been so resolute and powerful during the most intense test rugby on the planet, simply cracked.

Playing at altitude is a much-discussed issue among teams that play at Ellis Park. Johannesburg sits at 5,751ft (1,753m) above sea level. If you thought the kicking games of both teams was massive, you are correct. A rugby ball travels higher and further with less oxygen in the air. The first penalty kick from Elton Jantjies travelled more than 65 metres from the kicking tee on halfway, over the black dot and past the dead ball line.

For players who do not train and play there frequently, it is much harder to breathe and recover from hard physical activity with less oxygen in the air.

Players from the 1960s talk of “a steel belt being tightened around your chest,” as the effects of less oxygen take hold of the visitors. Sports scientists debate the best way for teams to combat its effects. What they all agree on is that it does have an effect, even if it is psychological.

It is no accident that all but one of the South African substitutes play their rugby at altitude. Home teams have an advantage and for the Springboks playing at altitude is a big one.

I have little doubt that the altitude effect took its toll on the Irish players in the final 15 minute of the game.

Then backrow replacement, Warren Whitely sidestepped some tired Irish tacklers to take the Springboks towards victory.

The “mirror image” of change continued in the last 10 minutes of the match, as Ireland turned over precious possession with careless errors.

An Irish backline set play, from a scrum, only 25 metres from the South African line was penalised for crossing – an unforgivable “sin” at any level.

Moments later an Irish lineout was stolen and then Paddy Jackson and Andrew Trimble stuffed up a simple pass. South Africa had all the possession and with it the victory.

The defeat will make very bitter viewing for the players at the team match review.

They had the match and the series in their grasp and they let it slip. Opportunities like that come along once in a career.

But all is not doom and gloom.

For the vast majority of the match Ireland dominated. The Irish forward play was excellent. In particular, the Irish scrum powered over the Springboks. That is no small statement. To outscrum the Springboks is a tremendous achievement.

It is a cruel twist of fate that a few missed tackles cost Ireland so dearly, because over all the Irish defensive effort has been courageous. It is particularly harsh that both Conor Murray and Paddy Jackson missed key tackles that led to tries, because they had been among the bravest against the giant Springbok runners.

The inspirational leadership of Rory Best continues to power this team.

In two very contrasting match preparations, Joe Schmidt spent last week trying to get his young team down from the dizzy heights of an unlikely win. Now he has to lift his team as they come to terms with the fact that they had a once in a lifetime opportunity in Joberg and blew it.

Who would be a coach!

There will be a reckoning in Port Elizabeth. The great news for the Irish is that it is one all and a series victory is still a real possibility.