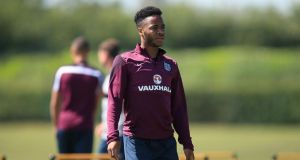 Liverpool would not suffer from selling Raheem Sterling because a player of similar quality could be bought with the proceeds, according to the club’s former striker Michael Owen.

Sterling’s future at Anfield remains in doubt after contract negotiations between the club and the player turned sour and the player’s agent declared the relationship was beyond repair. Owen says that Liverpool supporters should not be too anxious about the prospect of losing the talented 20-year-old, as Sterling would not be as difficult to replace as Luis Suárez proved to be.

“Put it this way: a year ago they lost Suárez and he’s irreplaceable,” said Owen at the launch of BT Sport Europe, the channel with exclusive live coverage of the Champions League from next season. “You cannot replace someone that good. If Liverpool lose Sterling, they can replace him with the money you get. He’s a very good player with lots of potential, but you can replace him. If I was a Liverpool fan, I’d obviously be wanting an answer [as to whether Sterling will stay or go] but I wouldn’t be losing sleep if he did leave and you got a fair old chunk of money for him.”

Real Madrid are reportedly among the clubs who would offer Sterling a new home if he were to leave Liverpool, but Steve McManaman, who made a similar move when he joined Real after the expiry of his contract at Liverpool in 1999, does not believe that Real are genuinely interested, nor does he think that Sterling is ready for such a big step up.

“Whether he wants to go there I don’t know, but I think the age of 20 is too young to be heading off,” said McManaman, who was 27 when he switched to the Bernabéu. “He’s still learning the trade. Is he good enough to play in a starting 11 for a Madrid, a Barça or a Bayern Munich, I would very much doubt. Because your consistency levels need to be extremely high and they have not been [for Sterling]of late. So I think talk of him going to Real would be pie in the sky, to be very honest. I think if he were to leave, it would probably be for an English team.”

McManaman believes Sterling should continue honing his undoubted talent before exposing himself to the demands he would face at a team that expects to win the Champions League. “I think his development is more important than anything,” said McManaman. “I just hope that whatever happens with Raheem, it’s for the benefit of him. He needs to play football regularly and he needs to keep on improving.

“He’s an exceptional talent but he needs to improve. As a 19-year-old, he was the best teenager in Europe. I’d seen a lot of them in Germany, France and Spain, and I’d certainly say that he was the best.

“But he was playing with Suárez and different types of players than he played with in his second season. He had a good start to that season but it tailed off at the end, and whether that was because of him getting a bit of stick or whatever, he has to become better.”