Liam Toland: England and Robshaw let down by decisions off pitch 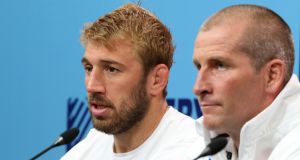 Ten days into the tournament and one could do a PhD on decision-making and psychology. Think of Japan beating South Africa or the Welsh medical staff almost having to build a field hospital pitch-side at Twickenham. English selection decisions have been made that will have ramifications throughout the tournament and no doubt Chris Robshaw’s closing minutes of the game will exercise psychologists for months to come. Should England have kicked their three points to draw the fixture rather than kick for the corner?

When the die was cast the next big decision was, where to target the lineout? Japan demanded the perfect throw from their sub hooker Takeshi Kizu against the ‘best lineout’ in the world. There was no Japanese debate, just ice-cold execution.

Yesterday Ireland had a key plan around their point of contact and their engagement of contact. As Romanian tackles broke well into triple figures, adjustments were made and scores came. But there were six Irish lineout maul attacks on the Romanian line.

The first four struggled but the fifth was a perfect attack and score; Ireland hit the tail of the lineout. As did Romania for their eventual try. England didn’t (or couldn’t). What did Robshaw discuss with his outhalf Owen Farrell? Way back, in a game against Australia, England faced similar circumstances and Farrell demanded the ball. In the aftermath, his coach admonished him for not supporting his captain.

Decisions go further back of course. Or as Muhammad Ali noted “the fight is won or lost far away from witnesses – behind the lines, in the gym, and out there on the road, long before I dance under those lights”. Robshaw found himself under the national lights of Twickenham and lost the fight. Decisions beyond his control were his undoing.

Stuart Lancaster left ground supremo Steffon Armitage out of his squad and in doing so has forced a six-and-a-half Robshaw into his number seven jersey. But it doesn’t stop there. Robshaw can’t fill the void and, in an effort to compensate, his team-mates, such as tighthead Dan Cole, are forcing themselves into bad breakdown positions and the referee is penalising them. Dan Biggar’s 100 per cent kicking punished this decision.

In a commendable effort to ‘clean up’ England’s image, Lancaster has also left many of his bullying dogs out. There is no place for ill-discipline, be it thuggery or silly errors on the pitch, but Robshaw appears to have no quality lieutenants. He doesn’t have Dylan Hartley on the touchline when he needs him most. Hartley has a 92 per cent throwing success since the Autumn of 2013. That’s off 153 throws. There’s no one better in England.

Why is this relevant? Ireland are clearly in a different pool, requiring different building blocks. Canada and Romania are wonderful World Cup competitors and I’m privileged to have been part of both fixtures. An attendance of 90,000 at Wembley is off the charts and both opponents deserve immense credit for lighting up our weekends.

However, England have now proven that when things are going their way, as they did in our warm-up fixture some weeks back, they are controlled and extremely difficult opponents. But when things are not going their way, they lack the on-field lieutenants to change the momentum of a match. Against Fiji they needed the Vunipola brothers and Sam Burgess off the bench. That’s great use of the bench but what of the players on the pitch? Why couldn’t they make an impact?

Ireland, on the other hand, have clear gameplans. Yesterday they accepted the Romanian strengths around the fringe and attacked them nonetheless. For the opening four minutes and 45 seconds Ireland held the ball and attacked narrow targets. Was this a tactic in keep with the greater plan for the France match?

But Romania as expected were terribly narrow throughout in both attack and defence; 42 to 9 tackles in the opening 12 minutes was bound to exhaust them. When that fatigue arrived, Ireland switched subtly into non-engagement but at the same point of contact in order to fix the Romanians before shifting wide. The famed pull-back was invoked before contact, keeping all alive to continue hunting.

Joe Schmidt, whose obvious Test side is evolving, has made big decisions; chief amongst them has been the development of decision-making lieutenants for when the real pressure matches arrive.

The gameplan is evolving also and players are gaining pitch time and enjoyment (smiling).

My moment of the match was Eoin Reddan’s brilliant box kick, fielded by Keith Earls, who offloaded to his openside Chris Henry, who in turn did the same to Jamie Heaslip. From the ruck Cian Healy took at outhalf and crucially didn’t truck it up but stepped and passed out the line; aerial bombardment, high fielding, offloading, props playing and wingers scoring in the corner; Tommy Bowe!

PS: I want England to beat Australia next Saturday. Not for any mixed northern hemisphere hubris but because this amazing tournament needs them and for my PhD.