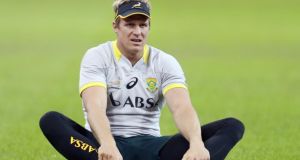 South Africa coach Heyneke Meyer will have been encouraged by the sight of Jean de Villiers running hard at an ongoing national training camp in Johannesburg as the Springbok captain fights to get fit for this year’s World Cup.

A massive influence to the team both on and off the field, De Villiers injured his knee in last November’s 12-6 loss to Wales and his participation at Rugby’s most prestigious tournament remains in serious doubt.

While it is too soon to say whether the inside centre will be in England for the September 18th-to-October 31st showcase, the recent signs are very positive for the 34-year-old.

“He is way ahead of where he is supposed to be and we are really happy with his progress at this stage,” Meyer told reporters on Tuesday.

“I am very happy with Jean, he is in a good space, he is really training well and the medical team has really done a great job.”

Team doctor Craig Roberts said De Villiers was close to stepping up his training but was still some way off being able to play.

“He isn’t far from doing some team training, so we are happy with his progress, but it’s still early days.”

The temptation may be to rush De Villiers back as Meyer admits to sweating over his centre options.

The decision of how and when this might happen, whether it be in South Africa’s internationals later in the year or the country’s domestic Currie Cup competition that follows Super Rugby, has yet to be made.

“It is also important he gets some game time, even with 100 caps and experience like his, he needs to get back to form,” Roberts said.

“It’s one thing getting back to playing, to get back to form is another... and to get confidence.

“That is what we will be looking at with him, to give him some game time and confidence. That is our plan.”

South Africa have been drawn in Pool B at the 20-team World Cup, alongside Japan, Samoa, Scotland and the United States.