Guy Noves and France waiting in the long grass for Ireland 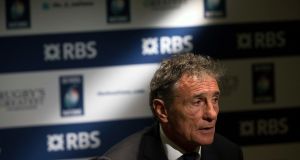 France head coach Guy Noves: has promised to restore some of the traditional flamboyance of les Bleus. Photograph:Inpho

One of the more fascinating aspects of another Six Nations campaign is the contrast in the coaching tickets, and specifically the head coaches. Coming at the outset of a new World Cup cycle, there are a couple of new ones on the block, with the presence of the vastly experienced Eddie Jones and Guy Noves set to galvanise the giant ambitions of arguably the two biggest World Cup failures, England and France.

By contrast, Warren Gatland is in his ninth year at the helm for Wales, and with a couple of Grand Slams and one title already under his belt, is set to remain in situ for another four seasons . Joe Schmidt starts out his third campaign looking for his third title.

In theory, the more settled coaching tickets should benefit their countries, and the proof is in their achievements. Even Vern Cotter is a year further down the track than Jones and Noves, and that ought to count for something after Scotland’s encouraging showing at the World Cup, despite last season’s latest whitewash adding to their fairly dismal record in the Six Nations.

Jacques Brunel, for his part, is starting out on his fifth and last campaign with Italy.

Jones and Noves start from a relatively low base, which may be no harm in either instance and will permit them something of a honeymoon period. Aside from being a very astute coach with a varied CV, Jones also talks a good game and has already done much to erase England’s sizeable World Cup hangover. They head to Murrayfield for a pivotal opener against the Scots mentally recharged and refreshed.

Noves has promised to restore some of the traditional flamboyance of les Bleus which had been lost during the depressingly route-one rugby under Philippe Saint-André. After four finishes in the bottom half of the Six Nations, France exited the World Cup with a record 62-13 defeat to New Zealand in the quarter-finals in Saint-André’s fitting farewell.

In his remarkable 22 years as head coach at Toulouse, Noves oversaw 10 French championships and four European Cups, yet there is a widespread feeling in the French rugby media that his appointment has come four years too late, or even 16 years.

“I’m not Zorro,” he has warned. “I don’t come with a magic wand. We will give our best. I want to give the kids the desire to pick up a ball and play rugby after watching a France game.”

If he merely achieves that much not only les Bleus but the Six Nations itself will be better for it.

Noves has appointed Jean-Frédéric Dubois, a one-time Toulouse outhalf who was the Stade Francais backs coach when they won the French championship last season, as the French backs coach.

Another familiar figure, Yannick Bru, has been retained as the forwards coach, after Noves initially helped Bru to cut his teeth on the Toulouse coaching ticket.

Noves has also brought aboard Gerald Bastide, a well-travelled one-time Perpignan fullback who, unusually in this day and age, honed his abilities as a defence coach purely in rugby union, most recently with the French under-20s.

Noves is regarded as old school, and the word on the French grapevine was that his coaching ideas have not really evolved over the past two decades, with a game between the senior team and the espoirs on a Tuesday or Wednesday remaining a cornerstone of Toulouse’s weekly activity.

He has never been seen in front of a laptop at pitchside and that is unlikely to change in the Stade de France over the next two Saturdays, when France will host first Italy and then Ireland.

Trevor Brennan spoke of Noves’s loyalty towards him when he was forced into retirement, and how the head coach’s expression of everlasting friendship and an open invitation to his home meant so much to him.

Watching Ireland play France and Argentina back to back on successive Saturdays in the World Cup painfully exposed the fact that not only were Argentina much better coached, but that they had more individual matchwinners in their ranks. And not only has outhalf remained a problem position for les Bleus, but even game-breaking outside backs and, almost unthinkably, scrumhalves have become so as well.

Nevertheless, at most, there can only be three countries with winning momentum from this weekend’s first round, and the likeliest of those is France, given they are at home to Italy this Saturday. That means they should be lurking in the long grass for a shot at Ireland, six days after the latter are done with Wales in what is sure to be a bruiser at the Aviva.

And having lost three and drawn two of their five games under Saint-André against Ireland, this is already the game that les Bleus are targeting as the one most likely to define their campaign.

Furthermore, no matter the reservations over their talent pool, France will be more varied and more dangerous under Noves.

They can’t be anything but.