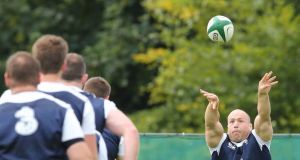 Opportunity knocks for a slew of Irish World Cup fringe contenders on Saturday in the first of the four warm-up games against Wales in Cardiff.

While Joe Schmidt on Friday stated that performance in training will be relevant, nothing can replicate the intensity of a test match. Thus, strong performances here will be impossible to overlook.

This game is all the more relevant as a trial given Ireland will bookend their World Cup pool itinerary with games under the Millennium Stadium’s closed roof against Canada and France.

The players with the first opportunity to audition for the 31-man squad probably include the entire back-five. With Schmidt also confirming they are likely to go with a 17-14 split, and presuming six half-backs travel, this probably equates to choosing about eight players out of 15 backs in the 46-man squad.

Hence Felix Jones at full-back, Andrew Trimble and Fergus McFadden on the wings, and the centre pairing of Darren Cave and Keith Earls, all have the chance to press their claims against Wales in front of a 74,000-capacity attendance.

One ventures that Donncha Ryan, Jordi Murphy, and especially Tommy O’Donnell will need to showcase their abilities in this environment too, bearing in mind the usual competitiveness amongst the back-rowers and the likelihood that only two of Murphy, O’Donnell and Chris Henry will make the cut. This encounter could also be important for the claims of some replacements – namely Michael Bent, Dan Tuohy, Henry, Kieran Marmion and Simon Zebo.

It would be a surprise if the remainder of the starting team – Jack McGrath, Richardt Strauss, Mike Ross, Iain Henderson, Jamie Heaslip, Eoin Reddan and Paddy Jackson – aren’t included in the squad. Then again, Schmidt augmented the comments earlier in the week by Simon Easterby that there could be surprises.

“If you speak to the players that is probably the feeling they have as well, that they don’t feel because they have done something in the past that we are going to make any assumption that that is going to be delivered in the future. While the best predictor of future performance may be past performance, how far back do you go for that past performance? The current performance, at training, when we put game scenarios to them at training, they are also a very powerful indicator to us as to who is best prepared. Again it’s balancing up all those elements.”

Schmidt name-checked Henderson, who starts in the second-row against Wales and may well move in the back-row, in highlighting the kind of versatility the coaches need in finalising a 31-man squad. The current 46-man squad will be whittled down to a more manageable “38 or 39” by the end of next week, which means “some players probably won’t get an opportunity. But that’s part of the pre-season, it has allowed us to get to know some players and for them to get an opportunity in the environment that hopefully will be an investment for the Six Nations.”

Schmidt also said front-liners were being eased back on an individual basis. After hosting Scotland on Saturday week, there is a two week break to Ireland hosting Wales on August 29th, and after last week’s friendly chat between Schmidt and Warren Gatland, the signs are that both will be near full-strength that day.

The 31-man squad will then be finalised in the day or two after that game, in readiness for the final warm-up game against England at Twickenham on September 5th.

With so many changes (only Ross, the one ever-present starter under Schmidt’s watch over the previous 18 tests and Heaslip survive from the starting XV in Murrayfield last March) and new combinations, the Irish coach accepts that they will lack cohesion and struggle to reach each other’s body language at times.

“We’ve tried to prepare for that as best we can, but in the Millennium Stadium, with so many people, the noise and excitement of what is still a Test match that focus on our performance is probably more important to make sure that we do as much as effectively as we can.”

Playing for the team and those alongside them will be as significant as performing individually. “Combinations, I think, are really important. It may be that some players combine really well and, therefore, you might lean towards them as opposed to an individual who’s very good, but hasn’t linked in, in the same manner.”

Although they will surely keep some moves up their sleeves, Schmidt said they were not of a mind to keep their powder dry. “I think we’re a relatively open book. I think teams that do their homework on us have a pretty good indication on how we play. We’ve had a small window to develop that a little bit. But you would be surprised how quickly six weeks can go and how few minutes you get on the pitch specifically either tactically or technically adjusting what you’re looking to do.”

Nor would Schmidt be emulating Stuart Lancaster in issuing strict guidelines as to how their players use social media during the World Cup.

Preferring “mainly a common sense approach”, he had sympathy for his English counterpart as the hosts and given the size of their media following.

“But there is an awareness that everybody is equipped with a camera these days. With social media being so immediately accessible and permanent, when something has been re-tweeted or copied, it’s up and if you take it down someone else can keep putting it up. That’s the time we live in. I don’t fully understand it, so I won’t pretend to. I will leave it for people who are smarter about it than I am and that would include most of the players, to be honest.