Garry Ringrose back training and back in the mix for Ireland 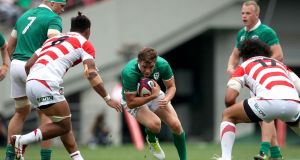 Gary Ringrose: has linked up with the Ireland squad following his recovery from injury. Photograph: Ryan Byrne/Inpho

Garry Ringrose linked up with the Irish squad at their Carton House base last night, having returned to full training with Leinster last Friday and again yesterday, thus putting him in the mix for Saturday’s Nat West Six Nations game against Wales at the Aviva Stadium (kick-off 2.15pm).

The 23-year-old, who missed the Guinness Series in November after undergoing shoulder surgery, hasn’t played for six weeks due to an ankle injury.

Chris Farrell thus remains the favourite to replace the injured Robbie Henshaw, having won his first two caps in the autumnal window in the wins over Fiji and Argentina, and having been in Ireland’s Six Nations squad from the outset.

Ringrose could be named on the Irish bench, although a likelier scenario is that he returns for Leinster against the Kings at the RDS this Friday, with Fergus McFadden’s versatility seeing him named among the Irish replacements.

“I personally think it’s a push, but that’s my opinion on it,” ventured Leinster scrum coach John Fogarty when asked if Ringrose could be involved on Saturday.

“I think it’s a tough one but on the other side of it, he’s so intelligent, that if he’s physically really, really good, he’s probably one of the only guys you could move back in there.

“There is much instinct that is sharpened over one or two games. Some of them get back so quick, but sometimes they need that game for their own confidence. I’m not saying this is the case, it’s just my opinion on it.

“I think he is smart enough to move straight back in. He’s physically going to be in a good position. It’s a big call. Joe has made great calls over the years so if Joe puts him on the bench...”

An IRFU statement also said that “Tadhg Furlong, Iain Henderson and James Ryan are progressing well through their respective rehab programmes,” while some of the other “additional players” called into the Ireland squad this week are the fit-again Munster pair of Andrew Conway and Niall Scannell.

The latter took part in last week’s two-day camp in Athlone, and will again train with the squad following an elbow injury to Rob Herring in Ulster’s defeat to Edinburgh.

Herring’s team-mate John Cooney will also train with Ireland this week following the knee injury sustained by Luke McGrath in Leinster’s win over the Scarlets. Although McGrath has been ruled out of his province’s Guinness Pro14 game at home to the Southern Kings on Friday, and most probably the remainder of the Six Nations, the scrumhalf is expected to return in time for Leinster’s European Champions Cup quarter-final against Saracens at the Aviva on April 1st.

“Luke isn’t going to be available this week but I think everyone is very confident it’s not long-term. There’s not that worry downstairs,” said Fogarty, in reference to the Leinster medical staff and the Saracens game, “and I’m going off that. The lads aren’t stressed about what’s going on with Luke at the moment but he’s not going to be involved this week. It’s disappointing, he’s such a big part for everyone, for both sides.”

Relatively speaking though, it is encouraging news, and could afford the Leinster think tank the option of starting Scott Fardy and James Lowe as their two “non-EU” players against Saracens, with the unfortunate Jamison Gibson-Park missing out.

James Tracey is also training fully this week after recovering from his elbow injury. Seán O’Brien did some running with Leinster last week and will look to step up his rehabilitation further this week from a hip injury, but the odds must be against him featuring for Ireland against Scotland in two weeks’ time or England a week later, while there is increasing confidence that Jamie Heaslip might return in March or April.

Given the six-day turnaround, Rory O’Loughlin is unlikely to feature against the Kings as he observes the Return to Play Protocols. Similarly, Ross Byrne must be considered very doubtful after suffering a bang to his hip which obliged him to pass the kicking duties over to debutant Skerries outhalf Ciarán Frawley, who thus could make his full debut against the Kings.

Extolling the “experience” and “messaging” which Scott Fardy brings to the pack, and the “infectious energy” which James Lowe provides, Fogarty noted that 38 players were unavailable to Leinster at points in this window, which also afforded a welcome opportunity to give game time to Frawley, Will Connors and Josh Murphy last Saturday.

“I said to Ciarán after the match. ‘Jeeze, you did a great job. So composed in your minutes’. And he said: ‘I was absolutely bricking it, absolutely bricking it’. I said: ‘Oh my God. It’s going to be great to see you when you feel confident because you did a great job.’ He’s a guy that we’ll potentially see against Kings, I’m not sure, but they’re the positives as well.”