Four debutants on Wales side to play Ireland in warm-up 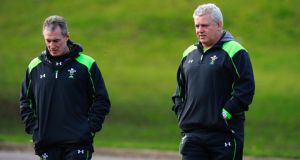 Wales head coach Warren Gatland says he is looking for the perfect blend of experience and youth ahead of the upcoming World Cup, and he’s blooding four new players this weekend against Ireland.

The New Zealand native has named four debutants within a largely experimental side to play Joe Schmidt’s team this Saturday in the Millennium Stadium.

Ross Moriarty, Tyler Morgan, Eli Walker and Dominic Day all make their first appearances for their country in the World Cup warm-up fixture.

Moriarty, whose father Paul and uncle Richard both played for Wales, helped England win successive Under-20 World Cup finals in 2013 — against Wales — when his team-mates included current senior England stars Anthony Watson and Jack Nowell, and in 2014. Moriarty is not tied to England because he has not represented either the senior team or England’s designated second XV, the Saxons.

Scott Williams captains the Welsh from inside centre.

The Irish team will be announced at lunchtime on Thursday for the Saturday fixture, kicking-off at 2.30pm.

“Saturday is a real opportunity for these players to put their hand up,” Gatland told the media after announcing the selection on Tuesday.

“We have been really impressed over the last few weeks, we have put the players under a lot of pressure and they have responded really well.

“Today is their opportunity to show what they can do on the international stage.

“We have the right blend of youth and experience and it’s all about grasping the chance at this level.

“It’s going to be a huge occasion, Ireland coming to town, a packed Millennium Stadium and players with everything to play for.”