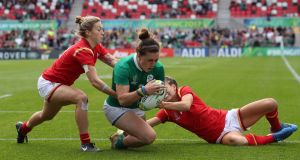 Katie Fitzhenry returns from Sevens action to play for the Ireland senior XV against Italy at Donnybrook on Sunday. Photograph: Billy Stickland/Inpho

Ireland Women’s head coach Adam Griggs has made two changes to his starting XV for Sunday’s home game against Italy in Donnybrook (1pm).

Katie Fitzhenry, who was involved with the Ireland Women’s Sevens side last weekend at the Sydney Sevens, comes into the side to partner Sene Naoupu in midfield.

The other change comes in the pack where Paula Fitzpatrick moves from the replacements to start in the secondrow alongside Nichola Fryday.

Two uncapped players, Edel McMahon and Michelle Claffey are named on the bench.

Ireland were beaten 24-0 by France in their opening game in Toulouse last Saturday night and Griggs is looking for an improved showing on Sunday.

“It was a very tough encounter in France last weekend. It’s always hard to go to their and get a result and while we were disappointed in some aspects of our execution, there was plenty to learn from and build on for this week,” said Griggs.

“There were a number of new combinations and while that will take time to bed in we are focused on improving our performance for the first of three home games in Donnybrook.”

* Uncapped at this level