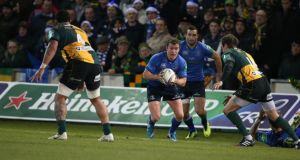 Eoin Reddan injured his calf muscle during training and will have to sit out the squad sessions over the next few days.

Eoin Reddan has been sidelined for the week and is highly unlikely to play any part in Ireland’s opening Six Nations championship match against Scotland in Aviva Stadium on Sunday.

The Irish scrumhalf injured his calf muscle during training and will have to sit out the squad sessions over the next few days at the team base outside Maynooth.

Reddan’s misfortune means that Isaac Boss has been drafted into the camp. It’s a timely boost for Reddan’s Leinster teammate, who won man-of-the-match in the Irish Wolfhounds win over England Saxons last weekend in Gloucester’s Kingsholm.

“We’ve called Isaac in for the session this morning because Eoin has a slight problem with his calf,” said assistant coach Les Kiss. “We’ll give him until the end of the week and see what happens. It’s very unlikely that he’s going to be there.”

“Bossy had a sensational game against the Saxons,” added Kiss. “So he is ready to step up if required.”

Mike McCarthy may also struggle to find full fitness for coach Joe Schmidt to pick as one of the second rows when the Irish team is announced on Friday. Following a stamping incident in Leinster’s round six Heineken Cup match against the Ospreys, McCarthy was taken from the pitch and received 23 stitches to a head wound. Ospreys lock Ian Evans was shown the red card for the incident and was subsequently given a 12-week ban and will miss the entire championship. Wales coach Warren Gatland now looks set to choose between Luke Charteris and Andrew Coombs as Alun-Wyn Jones’ second-row partner.

Kiss also insisted that McCarthy will be able to play if selected as much of the initial swelling in his head has subsided since the injury almost two weeks ago.

“When you saw him the first week it didn’t look nice,” said Kiss. “His face had swelled up. But it’s come down a lot. He has to wear gear to protect it so there are some issues around it although it wouldn’t stop him from playing.”