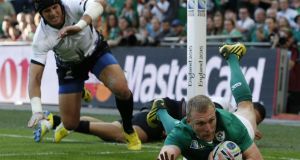 Keith Earls went over twice for Ireland during their win over Romania at Wembley. Photograph: Afp

Job done with a bonus point, and Ireland move on to the serious stuff seemingly in better form, with more variety and assured of what they’re doing than their main rivals from Italy and France. With a little more precision, Ireland might have won by more, but not many in a carnival-like celebration of Irishness appeared let down.

The truly encouraging part was the clear well-being of the most viable contenders for front-line or bench duty in the upcoming games. Uppermost amongst these, perhaps, were Cian Healy and Tommy Bowe. Healy’s was a typically barnstorming display of hard, leg-driving and quick carries, studded with one perfectly drilled, spiral kick about 70 metres downfield. And he came through 54 minutes.

Bowe looked back to his best after his unhappy day in the final warm-up at Twickenham; fit, sharp, strong in the air and in contact, with two nicely finished, winger’s tries by the corner flag. Mention too must be made of Simon Zebo, who gave three try-scoring passes, and Keith Earls, who also crossed twice. Zebo’s heads-up creativity, link play, passing vision and footwork were all in good working order. He really did add another dimension to Ireland’s counter-attacking and running game.

Ireland’s set-pieces were well-executed again, and a dependable launching pad for their running game, but what really had Romania gasping for air was the speed of Ireland’s ruck ball, something France struggled to achieve against opponents who will give Italy a run for their money.

No doubt mindful that Romania had played four days previously, Ireland opted to run the legs off their opponents from the word go. Romania added to their workload for some aimless and fairly un-testing kicks from their own half, as they had done against France, and it afforded Zebo ample time to work counter-attacks with his wingers. Again, this looked like something which had been worked on in Burton-Upon-Trent.

The nature of this game was always likely to give the back three more chance to influence than might normally be the case, and they all underlined how the outside three area is the most competitive in the squad.

Ireland’s intention to play much more of a ball-in-hand game was evident from the kick-off. In the first five minutes, Ireland made 32 carries to one. Typical poaching at the breakdown by Chris Henryt earned a penalty from which Ian Madigan opened the scoring from 43 metres. The singing along the Wembley Way had been mostly football chants, appropriately enough, but this was the cue for the first rendition of The Fields.

Romania did respond with some multiple phases of their own, and when Jared Payne - claiming his leg was being held - was pinged for not rolling away, scrumhalf Valentin Calafeteanu levelled.

Zebo almost scored a stunning first try after Richardt Strauss brilliantly gathered an offload from the dancing Earls. Zebo deftly grubbered beyond the covering Michael Wiringi, re-gathered and took the last tackle to score by the corner flag. Alas, recourse to the TMO showed that his toe was still touching the ground outside the touchline when he re-gathered.

Minor compensation came by way of another Madigan penalty, before Earls superbly retrieved a Reddan box kick and offloaded to Chris Henry, who in turn had Jamie Heaslip in support. From the recycle, Healy moved the ball on as first receiver, with Payne the link before Zebo gave the final unselfish pass to Bowe when he probably could have scored himself. Bowe still had some work to do, as Catalin Fercu drifted onto him, but he finished strongly.

Nine minutes later, Zebo gave the try-scoring pass for his left-winger too, though the one for Earls was a pearler, measured at 25 yards with a strong right hand across his body, for his Munster teammate to skate in from 25 metres out. It was also testimony to Zebo’s heads-up awareness to realise where Romania had left space.

Ireland opted for penalties up the line as they went for tries in the last 10 minutes of the half, in the premise that Romania would wilt, but their execution was slightly awry, and Romania held firm to the slight disappointment of a hugely enthusiastic crowd.

But you sensed the toll on Romania would tell if Ireland remained patient and accurate. Within four minutes of the restart, Reddan returned to the blindside off a line-out maul and grubbered deftly for Earls to gather and score.

The announcement of the World Cup record attendance prompted a sustained Mexican Wave, and Ireland had to wait a while for their bonus point try. The introduction of Paddy Jackson and Rob Kearney meant a reshuffle, one of which saw Darren Cave moving to outside centre, and he used the extra space and understanding with Jackson for the first of two strong breaks.

The centre Csaba Gal was sin-binned for cynically killing the ball, and Ireland struck stealthily when opting for a five metre scrum. Reddan worked a loop with Paddy Jackson, with Madigan as a decoy to check the drift, and Bowe again finished strongly in the corner.

When Michael Wiringi’s restart didn’t go 10 metres, Paul O’Connell (on as a replacement to a huge roar) was first to the half-way line for the scrum. This ensuing try was even better. Jackson again attacked the line well and skip passed sharply to Cave, who popped it behind to Madigan, with Kearney a decoy, for him to release Zebo up the left. Zebo in turn found Kearney with an inside pass for his third assist of the day, but Kearney was injured in scoring, evidently in pain in his lower back or hamstring area, and was soon replaced.

A well-executed line-out maul yielded a sixth try for Chris Henry - somehow you sensed O’Connell’s presence would ensure that - but Romania had deserving compensation when going to the corner, as the veteran Ovidiu Tonita, who had a fine game, ploughed through the Jackson-Madigan axis.

1 Keith Duggan: Bubba Wallace tweet shows just how troubled Donald Trump’s mind is
2 Jack Charlton’s own grievances endeared him to Irish fans
3 Jack Charlton: Tributes paid to ‘sporting icon’ and ‘father figure’
4 Capturing Irish hearts and falling asleep in the Vatican: Jack Charlton in his own words
5 Andy Moran on moving on from a Mayo career that glowed golden to the end
Real news has value SUBSCRIBE