Carter to bring up 100 caps for All Blacks against England

Outhalf to reach landmark at Twickenham as both coaches names sides 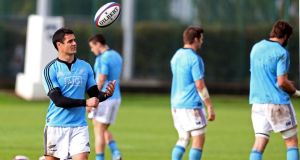 All things going to plan, Dan Carter’s 100th test match for New Zealand at Twickenham on Saturday will not be the last time he plays for the team at England’s hallowed home ground.

Carter, who will become the fifth All Blacks player to achieve the milestone on Saturday, is hoping to return to London on October 31st, 2015 for the World Cup final in what will surely be his international swansong.

The key to achieving that plan, however, lies in the reason why it has taken Carter so long to achieve the 100-cap milestone since he moved into the ‘nervous nineties’ more than a year ago. Injury.

The 31-year-old will make just his sixth appearance for the world champions in their 13th test match of the year after a series of setbacks curtailed his chances to achieve the mark earlier in the season.

A crunching tackle in September by South Africa hooker Bismarck du Plessis produced a shoulder injury that ended his season before the All Blacks’ northern hemisphere tour this month.

Lauded as possibly the greatest outhalf to play the game, injuries have been the virtual constant in Carter’s career in recent years.

A torn Achilles’ tendon while playing for Perpignan in France in early 2009 has seemingly been the catalyst for further leg injuries, which have all contributed to an increasing number of absences.

Carter’s low-point, however, came during the 2011 World Cup when he tore a tendon in his groin while practicing goal-kicking ahead of their final pool match against Canada, a game where he had been named captain.

The injury left him writhing in agony and the rugby-mad nation wondering how they would win the tournament without his calming influence that has set him apart from his peers. They did, though, with a number of back up outhalves helping to land the trophy.

“(Captain Richie) McCaw and Carter are two of the greatest players we’ve ever had,” All Black coach Steve Hansen said this week. “We just need Dan to get some game-time over these three weeks. It’s not about re-establishing himself.

“The big, burning question is, are (they) going to make the World Cup?” added Hansen.

Initially selected as an inside centre by John Mitchell in 2003, Carter moved into the number 10 jersey against France in 2004 and has held a mortgage on the position since.

That decision to move him to the pivotal position by then All Blacks coach Graham Henry signalled the end of the international careers of Andrew Mehrtens and Carlos Spencer.

Carter appeared to be a perfect mixture of the two. A direct, fleet-footed runner like Mehrtens, coupled with shades of the side-stepping trickery of Spencer.

Crucially, he had the Mehrtens’ distribution and kicking game. A booming left-footed punt, delicate touch with chips and grubber kicks and deadly accurate as a goalkicker.

No-one since then has seriously challenged Carter, though Nick Evans pushed him hard for the role before realising in Henry’s eyes he would always be an understudy and packed his bags for a successful club career with Harlequins in England.

Like most top-class athletes, Carter appears to have time to weigh up a situation and then take the right option, whether it be to kick, pass, or run while under pressure and make it look easy.

Immensely strong for his 1.78m tall, 93kg frame, Carter has helped redefine the attacking template for outhalves with the All Blacks constantly looking for ways to exploit space in an increasingly congested defensive line.

Deceptively quick, he has often left loose forwards flapping at the air as he lures them in, steps, accelerates and fends them off to ghost through the gap and link with his unmarked players as the defence scrambles back.

Like Jonny Wilkinson, whose career he was measured against before the New Zealander overshadowed the Englishman in the British and Irish Lions series in 2005, Carter also has no fear in defending the inside channel.

His style has arguably changed the outhalf role and been adapted by youngsters Aaron Cruden and Beauden Barrett, who are providing Carter with possibly the biggest challenge he has faced for the starting spot.

“We’re very fortunate we’ve got a young man who’s becoming world-class in Crudes, and we’ve got another young player in Barrett who’s not far behind,” Hansen added.

“If they (Carter and McCaw) don’t make it through lack of desire or performance, we’ve got replacements there and ready.”

Rookie winger Charles Piutau, who scored one try and set up another for Kieran Read in last week’s 26-19 victory over France in Paris, was given the nod ahead of Cory Jane on the right wing with Julian Savea restored to the left wing after he recovered from illness.

Hansen made just one change to the squad that beat France with Steven Luatua coming onto the bench for Sam Cane for the match at Twickenham, which has been hotly anticipated after Stuart Lancaster’s side ruined the world champions’ bid for an undefeated season last December.

England, meanwhile, have made one change to their starting XV by recalling Dan Cole at tighthead prop.

Cole dropped to the bench for last weekend’s 31-12 victory over Argentina and was replaced by David Wilson, but the front rows have swapped places once more for England’s final test of the autumn.

Joe Marler has successfully completed his return to play protocols after being concussed against the Pumas so continues at loosehead, packing down alongside Dylan Hartley who wins his 50th cap.