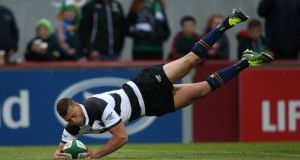 Barbarians’ Zane Kirchner touches down to score a try in the game against an Ireland XVat Thomond park. Photo: Billy Stickland/Inpho

The Baa-baas sought to give it a go in time honoured fashion but Ireland’s recourse to the maul, Greg Garner’s pedantic whistling and the rain were not in keeping with tradition. There may also be repercussions for the yellow card which Jack McGrath earned for kneeing Konstantin Mikautadze in the back.

Ultimately, this was an eminently forgettable, ragbag, error-strewn match in which few players had the opportunity to cover themselves in glory, and few did.

With the World Cup in mind players were unlikely to play their way into the 31-man squad, but they could blotch their copybooks. Viewed in that light, though, Craig Gilroy took his try well, the wingers missed too many tackles, with Dave Kearney drawing the short straw against the lively David Smith. His performance, along with Gerhard Vosloo, merely underlined Toulon’s embarrassment of riches.

The quotient of missed tackles spread through the ranks, and was probably the most disappointing aspect of the Irish performance for Joe Schmidt. Luke Marshall put in a good shift, albeit mostly defensive and seemed not to trust the uncapped Colm O’Shea. Dan Tuohy probably needed to do more given the return to well-being of Donnacha Ryan. Tadhg Furlong also put in a decent shift, as did Chris Henry and Jamie Heaslip, but then the latter pair belong in the ‘probable’ and definite categories.

On a chilly if pleasant enough evening for rugby, the attendance was given as 16,110, which seemed fanciful. After receiving the kick-off the Barbarians bossed the first five minutes; making plain their intentions when Ruan Pienaar tapped the first penalty on the Irish 22.

Applying width against a defence that became a bit narrow, long passes by Pienaar and Jimmy Gopperth enabled Zane Kirchner to give Alex Cuthbert the run-in. Gilroy bit in alongside O’Shea, and by the time he turned and flailed at Cuthbert the damage was done.

Ireland responded by finding some attacking shape after O’Shea trucked up lineout ball, and when their first penalty accrued they opted to go up the line. Encouraged by the advancement of their first maul, twice more they went to the corner from close range.

Some robust defence kept them out but after a couple of scrum penalties, Eoin Reddan worked a switch with Gilroy, who then showed the better side to his game when dancing past the flailing tackle of Ryu Koliniasi Holani and Shane Jennings couldn’t prevent the touchdown. Madigan landed a good conversion to nudge Ireland in front.

However, Ireland were slipping off too many tackles for the coaches’ comfort; Dave Kearney, Henry, Devin Toner and Tuohy all missing the slippery Smith in one passage. An initial 8-1 penalty count helped Ireland, although when the second of two more mauls was held up short McGrath and Irish players were frustrated with the manner Mikautadze fell on the wrong side of the ball.

McGrath was binned for kneeing the prostrate Georgian in the back. But the teams finished the half level, and without further scores, when Garner lost patience with Roberto Tejerizo’s refusal to scrum legally.

Upon the resumption, Kirchner embarrassed his Leinster team-mate Madigan by stepping inside him, eluding Marshall’s attempted tackle and then chipping Dave Kearney to gather and score. Watching Leinster fans could have been forgiven for not recognising the numberless fullback, and Gopperth added the extras.

For his troubles, Madigan was then dumped on the deck by Jennings after passing. Old competitiveness dies harder than friendships. Jennings never did do friendlies, and indeed he then pointed to the sticks when Heaslip was penalised at the breakdown and Gopperth made it 15-7.

Ireland went to their maul, which was again halted, and Reddan’s tap and switch pass to Rob Herring saw the hooker dumped by the Wasps-bound George Smith, who made quite an impact, and Herring was led off. But finally, at the sixth attempt in total, a patient maul earned Henry a try and Madigan’s conversion made it a one-point game.

But the Baa-baas deserved their third try to Cuthbert after Gopperth had been held up short and a sequence of close-in rumbles followed. Gopperth’s conversion, in off the post, effectively sealed Jennings and co the win..

Indeed, Paddy Jackson did score neatly on the blind side after good carrying by Toner and Ben Marshall, and Madigan drop-kicked a fine conversion to give them one last play if they could claim the kick-off, and Garner had the final say when harshly calling a knock-on against Madigan. Going for that three-pointer had proved useful.