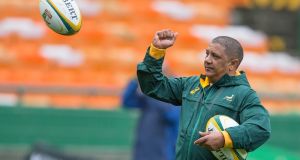 Allister Coetzee’s respect for the qualities of an Irish side he yesterday described as “outstanding” appears genuine, and perhaps more real than some of his predecessors. And yesterday he didn’t quite repeat his barbed comments in the aftermath of the Boks’ first Test defeat that “Ireland weren’t really interested in playing”. Not quite.

Still, the recently installed Springboks’ coach again referred to the potency of Ireland’s kicking game, which led directly to the opening try of the match by Devin Toner, before declaring that it was the home side’s intention to make Ireland “come out and play”.

Asked what he expected from the tourists in Saturday’s series decider in the Nelson Mandela Bay Stadium, Coetzee said: “Look, the Irish have seen that they got a lot of reward from their kicking game and I think they will continue with that. For us, it’s a matter of handling that and making them play, make them have a go.”

He paused, and was going to leave at that, which would have been out of character, for Coetzee is an enthusiastic talker about the game, especially when discussing his own side.

Give it a shot

So he continued: “It’s tough in Test-match rugby. Sometimes without the ball you’re a bit safer. You don’t make the mistakes and you wait for the opposition to make mistakes, but I think they’ll come out. It’s a great opportunity and a chance to give it a shot.”

Then he expanded further. “They’re a side that can attack and hold on to the ball and I expect the Irish to come firing in all departments; ball in hand, kicking game, solid defence. They will definitely look at improving and stopping our momentum. So, it’s going to be a hell of a battle.”

On a sun-kissed day by Algoa Bay on the Indian Ocean, this week marks a homecoming to “the Friendly City”, as he both played here for Eastern Province in his days as a scrumhalf, and began cutting his teeth as an assistant coach to the province when he retired in 1996.

Accordingly, he was noticeably more spritely than a week previously, as he could bask in the warmer glow of his first Test win as a coach after the defeat in his first night in this highly pressurised job. The theory is that the momentum has shifted in his side’s favour, and he clearly believes so as well.

“I would like to think so. It’s not just about the momentum of the team but a better belief in the team. There’s been massive belief in what we’ve been doing and what we’re trying, and like I explained to the players, it was never going to be finished by game one. It might not be ready by year one, or year two, but we know where we want to be going into the future.

“But you need to win for things to fall in place as well, just to confirm the systems, to confirm the support and the back-up that we have, that we’ve got the right team and the right calibre players, that the bench are making an impact when they come on and gelling as a team.”

The Springboks go into this game on the back of an unanswered 22-point salvo, which Coetzee also hopes will be a benchmark for Saturday’s performance, with lots of trademark straight, hard running.

“One hundred per cent. We really managed it really well. The times we exited well, we put pressure on their set-piece, we turned it over and we strung a good couple of phases together by putting pressure on with ball in hand.

“This is how I see the game, there is not just one way of applying pressure. If it’s not through your attack, it’s through your defence or kicking game. That last 20 minutes for us was a bit of everything. It was really a complete display.”

“Rugby will always be a gainline battle and once our ball-carriers were nice and low, we got Damian De Allende... spectacular, look at his try; he just ran over the guy [Conor Murray]. Peter-Steph’s try, it’s a matter of great body position, body height, no one could stop him,” he said of the try by his lock Pieter-Steph du Toit.

Warming to his theme, Coetzee added: “Even Ruan Combrinck’s try, if you look at the body height in contact. He ran over the guy [Paddy Jackson]. That is the message, it’s as simple as that. It’s a momentum- based game, it’s a gainline game and that’s the battle that we have to win.”

So more of the same this Saturday? “It won’t be approached any differently. Any Test match is going to a battle of attrition and that is what we have to prepare ourselves for.”

No surprises there then.