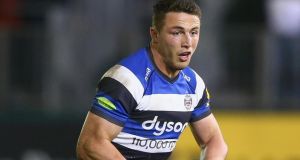 Bath’s Sam Burgess: his tackle technique is a cross between Trevor Brennan and a dumper truck. Photo: Michael Steele/Getty Images

Hollywood actor and co-owner of South Sydney Rabbitohs Russell Crowe defines him as the ‘sparkly eyed man’ where ‘those sparkly eyed men carve their name deep in rugby league’. The man himself introduces his family ‘that’s my brother Luke, he’s the oldest, there’s the twins, Thomas and George. Tomorrow night will forever become part of South’s history when for the first time in over 100 years four brothers will line up for the same team at the same time. Oh and that’s me, Sam Burgess. but the lads, they call me Slammin’.

Slammin’ Sam: The Sam Burgess Story is an extraordinary documentary (YouTube) into the mind and soul of an elite athlete; such as the image of him carrying his father Mark, who struggled with Motor Neuron Disease, up the 21 steps to his bedroom every night. That we’ll hopefully get to see him tomorrow is a precious opportunity. I’ve watched hundreds of his tackles over the previous days and Slammin’ he certainly is.

His tackle technique is a cross between Trevor Brennan and a dumper truck. He leads with his chest and inside shoulder where there’s almost no dropping of the upper body shoulder height. Moments after that contact he wraps his arms around the ball carrier but the severity of the hit often renders this arm action pointless; the ball carrier typically has hit the deck in a heap before the arms engage.

Burgess at outside centre had the second highest tackle count in an easy win for depleted Bath over London Welsh last time out so if he starts or comes on he’ll hunt for hits. To understand tomorrow I’ll peel back to January and Bath’s amazing win in Toulouse where their other centre Jonathan Joseph made a big impact.

Many aspects of Bath’s victory in Toulouse were impressive but I especially liked their restart off slow rucks. Scrumhalf will pick off the base as three fatties hit the gainline; scrumhalf then hits the middle man, usually second row Dominic Day who will pull it back to a support back giving depth to the next play which will have a backrower like Leroy Houston running very hard lines into the outside pillar defence first back defender posing questions of both, creating indecision and an incision that led to Matt Banahan’s opening Bath try. The key player in all this success is the fatty outside Day. The line he runs is crucial in selling the whole move and creates the confusion and opens up the channel for Bath’s blindside winger or loose forward to appear from nowhere.

It’s a simple but effective ploy which they utilise to get their midfield in space with Dominic Day again first receiver flanked by two pulling back to scrumhalf who’ll hit Ford relatively flat but his midfield remain disciplined and very deep.

It’ll be very interesting to see what defensive systems Matt O’Connor employs to counteract it. Clearly the breakdown helps but Bath’s little starter plays are effective off slow ball so dangers abound. They also keep Bath’s tempo high; after all they kicked the ball only 19 times with Ford contributing a paltry 6 kicks.

Joseph’s impact on his team-mates is special; when he is near the ball anything is possible. His team will never quit supporting and hunting for him because he can open doors that don’t exist. Take his openside Francois Louw’s running lines. Louw knows Joseph breaks tackles so he will run far more aggressive lines way ahead of the ball in anticipation of where it will end up.

Connacht fighting on two fronts is very exciting. Understrength last Saturday they flattered Munster but there were many sparks of quality in their play. But nearly every hard-earned entry into Munster’s 22 resulted in a cheap breakdown turnover or cheap penalties. One key moment was Simon Zebo’s try off a wonder pass from Denis Hurley. But preceding this play Connacht had a powerful counter scrum on a Munster’s halfway line put in which was judged illegal. That Munster had BJ Botha and David Kilcoyne on speaks volumes for Dennis Buckley’s ambition and technique. He got the upper hand but referee Leighton Hodges thought otherwise.

Connacht have the lineout, the scrum and with Robbie Henshaw back have a backline that can convert. Their young and talented half backs’ decisions must be early which is a real test for them.If passed it will give Connacht a home semi-final against lesser opposition than Gloucester.