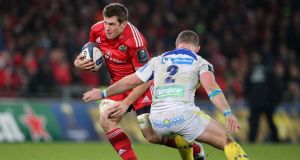 Munster on many, many occasions have turned seemingly hopeless situations into heroic, unfathomable victories.

With Ronan O’Gara on board, even this group of players did it when breaking Harlequins at the Stoop in 2013. But Ian Keatley seems to have taken ownership of the 10 jersey on the big days. The Dubliner nailed three from three kicks last Saturday and buried Leinster in October.

In that match at the Aviva Stadium, Anthony Foley, Peter O’Mahony and Paul O’Connell reverted to what made Munster great and they believed it was possible to impose similar physicality on Clermont in Limerick.

The plan failed. At 16-9, the door was ajar for O’Connell to engineer a scarcely deserved draw but Damien Chouly brilliantly stole that last lineout.

If Morgan Parra had been place-kicking instead of Camille Lopez, who converted just one from four, then they wouldn’t have needed to repel a late surge.

“If you try to out muscle Clermont, you might do it one in 10 times,” said Shane Horgan on Second Captains this week. “Munster should have known that . . . Just the sheer size of the Clermont side wins out there.”

Bonnaire’s absence weakens their lineout but Lapandry made a super-human 10 tackles in the last 20 minutes at Thomond. In worrying contrast, the absence of Dave Kilcoyne and James Cronin heaps tremendous pressure on John Ryan in his first European start at loosehead prop.

Maybe he could give Eoin O’Malley a call. The young centre came in for an injured Brian O’Driscoll at this bear-pit in December 2010, surviving the charges of Aurélien Rougerie. But this is different.

Zirakasvili, Jamie Cudmore, Sébastien Vahaamahina and Julien Pierre guarantee a punishing day. That in itself could be the ball game. It’s conceivable that Parra’s penalties will quietly knife Munster in their sleep.

Clermont have also added Zac Guildford to the back three, where Nick Abendanon threatened to tear up Munster out wide, until Felix Jones put in the sort of belting tackle sorely missed from five of last weekend’s starting Munster forwards.

And don’t forget Wesley Fofana who simmered in Limerick and may well boil over here. Unless, that is, Foley’s bold midfield reshuffle can reap a massive reward. JJ Hanrahan’s representatives scored a few points this week when the story broke of his possible move to Northampton. And sure enough, the Kerry man replaces Denis Hurley in a new midfield alongside Andrew Smith.

The plan, undoubtedly, is to attack but the three-quarters will be doing well to get two clean chances to tear it up.

Not unless CJ Stander, in particular, delivers some yardage over the gainline. It’s guaranteed that O’Connell and O’Mahony will carry with relish. They must not be the only two making headway.

Clermont battered the hell out of O’Mahony and really Fritz Lee should have walked for punching Munster’s captain. Instead he was the most dominant player on the field.

“It would be an outstanding achievement for this group,” said Foley. “There are no hiding places. We just need to be very precise in what we are doing.”

Munster are the masters of see-it-to-believe-it days. This will not be one of them. Not in the most suffocating stadium in world rugby. Chouly and the other monsters drew too much blood in round three not to finish them off in round four.