Connacht lament what might have been as Wasps prevail 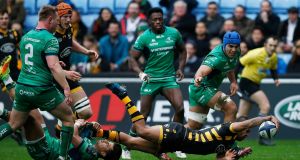 Kurtley Beale gets past the tackle of Connacht’s Stacey Ili before scoring Wasps’ first try in the Champions Cup game at the Ricoh Arena in Coventry. Photograph: Paul Childs/Action Images via Reuters/Livepic

Connacht gave it the good fight and did so their own way, playing their running brand of rugby and enjoying large tracts of possession and territory.

But they will ruefully reflect on the chances that went abegging and a seriously malfunctioning lineout.

Pat Lam’s team had more ball and made 15 offloads to three, not to mention seven line breaks to four.

With Kurtley Beale making an impressive debut alongside him, Wasps had the finishing power to run in four tries for a bonus point win.

Up front, Conor Carey’s eye-catching form, both at scrum time and more unexpectedly in the loose, went up another level, and alongside the ever-consistent John Muldoon, Jake Heenan and Nepia Fox -Matamua were good on the ball.

Kieran Marmion’s sniping and general running game were outstanding, as was the footwork and inventiveness of Tiernan O’Halloran at fullback, while Bundee Aki put in quite a shift.

However, the toll of a highly physical encounter told as O’Halloran and Cian Kelleher were casualties early in the second half, leading to reserve scrumhalf Caolin Blade playing the last half-hour on the wing.

Connacht stated their intentions literally from the kick-off.

With the Wasps back three all sitting deep, Connacht ran the ball back and forth across the pitch until Wasps conceded a penalty.

However, in what would also be a portent of things to come, Muldoon could not pull in McCartney’s throw, albeit it was redeemed by a big Connacht scrum on the Wasps put-in for Marmion to pilfer the ball.

Connacht went through the phases to work an overlap, but Stacey Ili’s pass to Jake Heenan on the right wing was picked off by Josh Bassett, whereupon Nathan Hughes scampered 40 metres upfield when beating the pillar defender, McCartney.

Ili was then penalised for side entry and from Gopperth’s lengthy penalty up the line, Wasps went through the phases rapidly and with width – Muldoon hauling down Christian Wade in the right corner – before Beale broke Ili’s tackle to score in the seventh minute of his Wasps debut.

Despite two more lost lineouts, with Ultan Dillane and Quinn Roux the intended targets, Connacht rumbled again, Roux, O’Halloran, Jake Heenan and Denis Buckley all carrying well but Jack Carty missed a penalty from the 22 metre line, 15 metres in from the left touchline.

It was a bad miss, but after Nepia Fox-Matamua showcased his ball-carrying, Carty atoned with a tougher kick after Beale was penalised and yellow carded for a high, one-armed hit on Niyi Adeolokun.

Alas, a good poach by Conor Carey having atoned for Connacht failing to gather Gopperth’s’s hanging restart, the timing of Muldoon and his lifters was again not in sync with McCartney’s throw, leading to Gopperth making it 10-3 when Buckley was adjudged offside.

However, a knock-on by Thomas Young gave Connacht’s scrum, altogether better, an attacking platform 22 metres out. Muldoon spun off the base, freed his hands off the tackle and popped the ball to Marmion, who scampered in untouched. Carty’s difficult conversion drew the sides level.

Marmion, having twice sniped through an unguarded ruck as Wasps fanned out, broke fully 40 metres off the restart, finding Carey of all people in support, before Adeolokun’s offload off the deck was too difficult for Heenan to take.

Connacht had more chances, following a leaping take by O’Halloran, but Roux’s bad pass eluded Adeolokun and Wasps’ tactic of targeting the ball in the tackle reaped a big dividend when Rob Miller ripped the ball from Heenan in contact five metres from the line.

While Heenan was down injured, O’Halloran ill-advisedly took a quick throw to Cian Kelleher and then fumbled a Gopperth kick in trying to keep it infield.

When Fox-Matamua went off his feet, Gopperth made it 13-10.

The half ended with a good read and big hit by Aki on Alapati Leiua, and another big Connacht scrum, but given their possession, territory and chances, a 13-10 deficit rankled.

Alas, they started the second half with another lost lineout, and although O’Halloran’s stunning footwork and offload released Kelleher, Adeolokun’s pass was picked off by Bassett. After a big burst by the imposing Ashley Johnson, Hughes muscled over, Gopperth making it 20-10.

Connacht were given a helpful hand back into the game immediately when Rory Parata raced up and jumped to catch Gopperth’s intended skip pass and score from 35 metres to make it 20-17.

Cue the key period of the match, as Connacht took the game to the home side, despite the double whammy of losing O’Halloran and Kelleher in quick succession.

This meant the welcome return of Matt Healy, who made a quick impression with his pace. But two muscular steals by Launchbury kept them at bay, as did Beale flying up to force a spillage by Healy, before a superb steal by Fox-Matamua led to Parata releasing Adeolokun, only for Carty to miss the ensuing penalty to level.

That was compounded when Johnson pounced as the ball squirted out of a ruck from Healy’s counter, and when Gopperth’s skip pass exposed a misread in an outmanned defence, Launchbury galloped in from 20 metres.

Wasps twice went to the corner in search of their bonus point, which was secured when more pummelling close in led to quick hands by Gopperth, Beale and Miller put Bassett over in the corner, albeit the last pass looked forward and the TMO looked at a close case of blocking.

To their credit, Fox-Matamua kick-started a break-out from deep and a patchwork Connacht were still probing at the end, but this was a case of what might have been.

Girls in green: meet the Irish women’s soccer team 10:29
Let’s face it, Saracens don’t really care that they are rugby’s most hated team 08:00
Michael Walker: Gareth Bale’s place in Real’s history a strange type of glory 07:00
Super League influx of world stars not no super for Vera Pauw’s Irish plans 07:00
Leinster look ready to step things up and burn off Saracens challenge 06:00
Crossword Get access to over 6,000 interactive crosswords