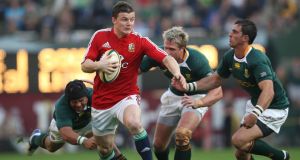 The Lions will play New Zealand Super Rugby sides for the first time on their 2017 tour. Photograph: Inpho

The British and Irish Lions’ tour of 2017 is set to comprise games against New Zealand Super Rugby teams for the first time.

New Zealand Rugby chief executive Steve Tew says details of what is likely to be a 10-game tour will be unveiled in May.

The three-Test visit will fall during a break in the Super Rugby competition, as happened when the Lions toured Australia in 2013.

The last Lions visit to New Zealand in 2005 featured 11 games, including seven against provincial opponents and one against New Zealand Maori.

That tour began a week after the then-Super 12 had finished, making it viable to play against NPC teams.

However, an elongated Super Rugby season looks set to end that Lions tradition.

“Whether it’s completely inevitable, I’m not sure,” Tew said on Friday.

“But we will be pausing Super Rugby so players will still be in their Super Rugby environment. It will be much more difficult to run a provincial side at that time.”

The 2013 Lions played nine games in Australia. Outside the three Tests, they faced the country’s five Super Rugby teams along with a game against Combined Country, which they won 64-0.

Tew says the Lions’ details will be released in conjunction with an overall New Zealand home schedule for the next two years, taking in a 2016 tour by Wales and two Rugby Championships.

It is being put together as one jigsaw because of a desire to ensure balance as well as a sound economic return.

“We want as many New Zealanders as possible to have the opportunity to see these games and these teams but we’ve also got to be practical.”

Tew says not all 14 applications to host international games will be successful. Some of the smaller applicants may instead host the Lions as a training venue, as happened during the 2011 Rugby World Cup.

One requirement of the tour is that it flows geographically to cater for the estimated 10-15,000 Lions supporters, many of whom will follow the tour on the road.

“However we cut and paste that tour, it’s going to be a daunting itinerary for them (Lions), so bring it on,” Tew said.