Saxon Warrior the one to beat as Epsom Derby trials begin 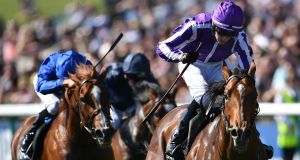 Aidan O’Brien will begin the Derby Trial campaign at Chester on Wednesday in the enviable position of having the red-hot favourite Saxon Warrior safely tucked up at home in Ballydoyle.

Saturday’s 2,000 Guineas winner is odds-on in some lists for racing’s ‘Blue Riband’ in less than four weeks time after his hugely impressive Newmarket victory.

The prospect of identifying his principal Epsom opposition will begin at Chester which stages the first of a series of traditional Derby trials that concludes with next week’s Dante at York.

In between will come Sunday’s Derrinstown Trial at Leopardstown, the Lingfield Trial a day earlier, with Chester also hosting the Dee Stakes on Thursday.

Ruler Of The World took the vase in 2013 on-route to Derby glory while last year Wings Of Eagles was runner up to his stable companion Venice Beach prior to his shock 40-1 success at Epsom.

On that occasion Wings Of Eagles beat his better fancied stable mate Cliffs Of Moher who had won the Dee Stakes beforehand.

In contrast just one of O’Brien’s six previous Derby winners, Camelot in 2012, won the Guineas before winning at Epsom, although Australia was third in the Newmarket classic in 2014.

Ireland’s champion trainer has declared the trio of Hunting Horn, Flag Of Honour and Family Tree for the Vase which O’Brien has won for the last five years. He also won it in 2011 with Treasure Beach who was just touched off by Pour Moi at Epsom.

Originally encouraged to use Chester’s trials more by Kieren Fallon, the ‘Roodeye’ festival has become a significant testing ground for the Ballydoyle trainer although the widespread feeling persists that the upcoming trials could wind up merely establishing a support cast to Saxon Warrior.

The Guineas winner is a best priced 11-10 favourite for Epsom and is just 7-2 with some firms to become the first since Nijinsky in 1970 to complete the Triple Crown in September’s St Leger.

His status is cemented by how his closest competition in the Derby ante-post betting are mostly other Ballydoyle horses.

The first three in last month’s Ballysax at Leopardstown - Nelson, Delano Roosevelt and The Pentagon - are next best in the betting. Only Godolphin’s Masar, third in Saturday’s Guineas, interrupts Ballydoyle’s current dominance.

“The Pentagon, Nelson and Delano Roosevelt will all go for the Derrinstown,” O’Brien said on Monday.

“Rostropovich and Kenya will go up to a mile and a quarter at Chester (Dee Stakes.) Kew Gardens will go to Lingfield. Depending on the weather some of the horses heading to Leopardstown could do for the Dante,” he added.

The setback that has ruled the Arc heroine Enable out until August is a reminder to those who believe Saxon Warrior is already past the post at Epsom as to how dangerous presumption can be.

A spokesman for Enable’s owner reported on Monday: “She has some filling in her knee which is being fully investigated. The advice that we have is that given reasonable circumstances she should be ready to run in August as a preparation for the Prix de l’Arc de Triomphe.”

Despite such a salutary reminder of how fickle the racing fates can be, O’Brien is a heavy favourite to claim a seventh Derby at Epsom on June 2nd and better the tally of his legendary Ballydoyle predecessor, Vincent O’Brien.

Only Enable prevented a British and Irish classic clean sweep by O’Brien in 2017 when landing both Oaks.

The Irishman has a seventh Epsom fillies classic in his sights too and on Wednesday will also have three shots at the Cheshire Oaks which Enable won a year ago. Another Irish runner in the Listed contest will be Gavin Comwell’s Princess Yaiza.

Saturday’s wide-margin Cork winner Flattering is set to run in Saturday’s Oaks Trial at Lingfield while the following day Could It Be Love will run in the French 1,000 Guineas at Paris-Longchamp. The champion two-year-old US Navy Flag will fly the colours for Ballydoyle in the French 2,000.

O’Brien also had news of Sunday’s 1,000 Guineas third Happily who will be aimed at the Irish 1,000 later this month alongside her stable-mates Magical and Clemmie.

1 Ireland 23 Georgia 10: How the Irish players rated
2 Ireland grind their way to grisly win over Georgia
3 Jim McGuinness: There is a way to save championship and make it competitive
4 No fireworks but Limerick get the job done against Galway
5 Car sliced in half but Grosjean survives huge crash at Bahrain Grand Prix
Real news has value SUBSCRIBE