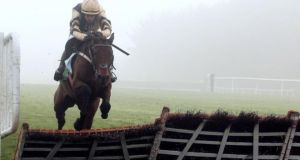 Nichols Canyon stepped into the temporary void left by Annie Power and Faugheen when barely breaking sweat in winning back-to-back runnings of the StanJames.com Morgiana Hurdle at Punchestown.

Ruby Walsh set out to make all on the now seven-time Grade One winner — shock conqueror of Faugheen last year — and while he had the filly Jer’s Girl for company, she could not live with the Graham Wylie-owned six-year-old in the straight, going down by 12 lengths.

Last seen competing in America in May, the 8-13 favourite only looked the third string at the beginning of the week for Mullins, who had hoped to unleash one of his two Champion Hurdle winners, but Faugheen was ruled out with a foot bruise and Annie Power worked unsatisfactorily.

Winning the Morgiana for the sixth successive year, Mullins: “I’m very pleased. He had to come in as a sub, but he did it nicely. Ruby said they went a very good gallop the whole way and his stamina just won out.

“Jer’s Girl decided to take him on early and he just kept galloping with her and he just outstayed her. He’s just got lots of stamina and once it became a test of stamina the conditions suited him more than any other horse in the race.”

He went on: “This wasn’t part of the plan. It was just the way things worked out so I’m not sure where I’m going to go next with him. At least we know he’s not too bad at that trip.

“He jumps fantastically and he goes a very very good gallop over two miles, so he’s competitive at it.

“I’d imagine we will be stepping up. That was part of the plan anyway. I just haven’t got a race picked out for him yet. I’d imagine it’ll be Christmas.

“He was very exuberant today. He’s very brave and I was hoping that his jumping wasn’t going to take too much out of him, but he put the other horses under pressure with his jumping.”

RaceBets cut Nichols Canyon to 6-1 from 8-1 for the World Hurdle at the Cheltenham Festival.

Mullins added: “The conditions of the race suited him, he was well in at the weights and class showed.

“His rating suggested he could do that as long as he was in good form.

“We’d planned to go up in trip, the World Hurdle at Cheltenham, we’ll see what happens, but at the moment that’s the plan.

Walsh said: “She (Jer’s Girl) travelled really well with me and we went a good gallop the whole way.

“It was a Grade One run at Grade One pace and he got the better of her at the second-last and then it was all over.

“He had a very hard race at Leopardstown last Christmas against Identity Thief and that might have left a mark for the rest of the season, but he was very good today.

“He doesn’t get the credit he should. He jumped to his right in America and at Aintree, but he was straight today.”

Earlier A Toi Phil came out best of the Gordon Elliott trio in the Florida Pearl Novice Chase.

Highly regarded by Willie Mullins last season, he was only an 8-1 chance in the Neptune at the Cheltenham Festival and scored on his chasing debut for Elliott at Down Royal.

He was one of three runners in the race for Gigginstown House Stud but Bryan Cooper chose to ride Noel Meade’s Disko, who was let down by his jumping on this occasion.

Ruby Walsh benefited from Cooper making the wrong choice and having bided his time in the rear, as the runners emerged from the thick fog at the second-last he had jumped alongside Nambour at the head of affairs.

Once clear on jumping the last the 3-1 winner powered away to win by seven lengths from stablemate Jetstream Jack.

The winner was cut to 16-1 from 20s for the JLT and RSA Chases at Cheltenham in March by Boylesports.

Elliott said: “We had a one-two so we’re happy. The horses ran well. You’ve seen as much as I’ve seen.

“When he got the gap going to the second-last he quickened through it and was gone.

“He won well. Ruby said he travelled and jumped well. The Drinmore will be the plan now, all being well.

“That’s a Grade Two and he won it well, so all he can do is improve from it.”

1 Inside the world’s largest sports air dome just outside Knock
2 Worst sporting moment: White knuckle ride on a hate-filled night at Windsor
3 As ever, Ronnie O’Sullivan sparks debate at the Crucible
4 ‘Embarrassment, anger, sadness’: the decline of the great Stephen Hendry
5 Matt Williams: Players’ sacrifice must outweigh the rest of society
Real news has value SUBSCRIBE