From the horse’s mouth: Willie Mullins on Cheltenham hopes

The trainer, who is hoping to do better than last year, is bringing 60 horses the festival 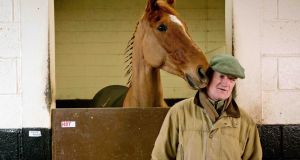 Trainer Willie Mullins with Annie Power on a stable visit to Closutton ahead of the Cheltenham Festival. Photograph: Morgan Treacy/Inpho

Despite mulling over the 60 individual small-picture details that surround the largest team of horses ever targeted at the Cheltenham festival, Willie Mullins still had time yesterday to ponder big-picture issues. These included the divide between flat racing and the jumps, which for an almost 60-strong media throng assembled at the champion trainer’s stables mostly revolved around shelter.

Covered warm-up barns are a feature of most top flat yards: not so at Closutton. In conditions that mocked the idea of spring, many of the jump game’s greatest stars strutted their stuff in front of a rapt but frozen audience warmed only by summer dreams of Ballydoyle.

“No covered rides here. I prefer not to, regardless of the weather. Otherwise you’ve people hiding inside. This way the horses know what’s what and they’re settled. This is a winter game, and you need winter ground,” grins the host to a drenched hack-pack, many of whom were more suitably shod for all-nighters than all-weathers.

With the winter game’s greatest show just a fortnight away, its most lustrous figure is under intense scrutiny but wears the pressure lightly. After last year’s record-breaking eight festival winners, there is an almost fatalistic attitude among Mullins’s rivals, backed up by the betting for some championship races which sees the greatest danger to a Mullins number one being the number two.

The man himself though is taking nothing for granted. Jump racing punishes presumption more than most sports.

“Others expect us to win. We go in hope. People credit us with things that are nearly impossible. Most things went right for us last year but in these championship races it only requires one stupid mistake and you’re out of it. And a virus in the yard can make it a complete blowout,” he says.

“But you have to enjoy this for what it is. I’m in a lucky position. We’ve had disappointments already [most notably Faugheen’s injury] but what we have here is unprecedented. Does any team bring 60 horses to Royal Ascot, for instance? So it is extraordinary, and as stressful as it is, you also have to look at it and say it is fantastic.”

“I thought she’d been beaten, and I saw screens up at the last so I thought Annie Power was in trouble. Coming off the stands I was rock-bottom. It was only then I heard we’d won and the best result of the week was that Annie Power got up,” he says.

That brilliant but headstrong mare is increasingly likely to be supplemented in to the Champion Hurdle as Vroum Vroum Mag looks a perfect substitute for the OLBG Mares race.

Mullins’s long-held belief in the old adage of keeping yourself in the best company and your horse in the worst does not apply, however, to Un De Sceaux whose exhilarating front-running style makes him an odds-on favourite for the Champion Chase.

Dividing up a strong novice hurdle team is trickier, although Min is another hot favourite to follow in the Supreme footsteps of Vautour and Douvan.

There are other easier options for some of his top contenders, but no urge to conform to the old adage when it comes to the race he covets most.

“It’s the Gold Cup and it should be the race we all aspire to win. We have a phenomenal team and who knows what will happen once they get past three miles: that extra 2½ furlongs brings out different qualities in horses,” Mullins says.

“It would be great to win but after these championship races you mostly feel just relief if you’ve won. What you enjoy is when a 25-1 shot surprises you and wins a handicap.”

What’s very difficult to picture though is teasing out any 25-1 shots from such a team.

Six of the best Mullins on his leading contenders

Vautour (Gold Cup) “He was asked a big question in the King George, going on that far out. Some have said there is a doubt about him staying the Gold Cup trip but traditionally our horses aren’t as fit at Christmas as they are now, and on his homework I’m happy he should easily stay.”

Don Poli (Gold Cup) “He loves Cheltenham and he loves that hill, and I’m happy he has enough speed for the Gold Cup. He certainly wasn’t short of speed when he won the RSA and that extra two and a half should be right up his street.”

Djakadam (Gold Cup) “He missed about 10 days after his fall at Cheltenham the last day but he wouldn’t have been doing much for a week anyway. I was initially worried about getting him there but he’s been working well, and I think we can easily make up those four or five days.”

Annie Power (Champion Hurdle) “Two seasons ago we thought she was a Champion Hurdle horse but Hurricane Fly was around then, and it just happened the races that suited her were at two and a half miles. It might actually be easier for her to go two miles because the pace will help her settle.”

Un De Sceaux (Queen Mother Champion Chase) “I’d love if the race was tomorrow. He’s in great form. I loved his manner of racing at Ascot. It was his most mature performance, settling, measuring his fences and he was going away at the end.”

Douvan (Arkle Trophy) “I don’t know if we’ve ever had anything as good. Ideally I’d have liked to get another race into him but the dry autumn meant we were almost into December before we could get going properly. And he has looked very impressive in his three starts.”

1 Kevin Babington: Learning to live again after life changed forever on Long Island
2 Matt Williams: The sky is not falling in on Irish rugby - but Ireland do need a new plan
3 Weekend Club GAA previews: Kerry football and Kilkenny hurling deciders top bill
4 Every yellow jersey winner must still feel guilty by some association
5 Sam Bennett: ‘A green jersey in the Tour de France is such a highlight of my career’
Real news has value SUBSCRIBE

Sam Bennett: ‘A green jersey in the Tour de France is such a highlight of my career’ 07:30
If soul-searching was a sport, today’s GAA teams would all be champions 06:00
Matt Williams: The sky is not falling in on Irish rugby - but Ireland do need a new plan 06:00
Superfan John Murphy keen to keep streak going and make it 80 not out in Donegal 06:00
Miss Amulet looking to complete rags-to-riches success at Newmarket 06:00
Here is your handy guide to sport on television this week