Flemenstar ruled out for season with tendon injury 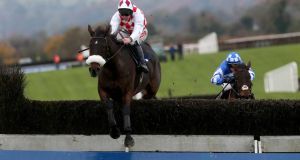 Flemenstar will not run again this season because of a tendon injury but connections expect him to return to action next term.

The brilliant chaser, who joined the Tony Martin stable in the autumn having previously been with Peter Casey, made a winning reappearance in the Fortria Chase at Navan in early November.

However, he was a late withdrawal from the John Durkan Memorial Punchestown Chase after suffering a knock to a leg and is still receiving treatment for the problem.

“We won’t rush him and we’re going to give him time. We’re just looking after him,” said owner Stephen Curran.

“We’re treating him at the moment, he’s looking well and he’s doing well. We’re looking forward to the end of the year with him.

“We’ll get him back okay, there’s no doubt about that, but we’ve got to mind him, and we will.”