The West Indies bounce back to hammer Pakistan 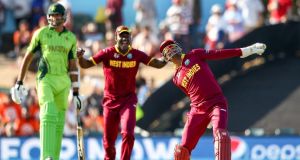 Denesh Ramdin celebrates after taking a catch in the West Indies comprehensive 151 run victory over Pakistan in Christchurch. (Photo by Martin Hunter/Getty Images)

The West Indies answered their critics as they battered Pakistan on both sides of the ball to get their World Cup campaign up and running with a 151-run victory in Christchurch.

Denesh Ramdin and Lendl Simmons laid the foundations for the Windies, with knocks of 51 and 50 respectively, before Andre Russell sparkled with an unbeaten 42 off just 13 balls to guide them to 310 for six.

With four wickets gone and 10 overs remaining the Windies cut loose, piling on 115 runs from their final 60 balls, although they were helped by poor Pakistan fielding throughout at Hagley Oval.

Pakistan’s reply got off to a disastrous start, with Jerome Taylor (three) and Jason Holder leaving them on four for one after four overs — the worst start in one-day history.

A sixth-wicket stand of 80 from Sohaib Maqsood (50) and Umar Akmal (59) helped stave off the inevitable, but they were eventually skittled for just 160 with 11 overs remaining, with Russell adding to his fine batting display by taking three for 33 with the ball.

With criticism still ringing in their ears after a four-wicket defeat to Ireland in Pool B on Monday, the Windies slipped to 28 for two after 7.5 overs as Chris Gayle (four) and Dwayne Smith (23) departed cheaply.

Pakistan had an opportunity to cut the Windies off before they had a chance to build up steam, but Shahid Afridi dropped an easy catch after Samuels miscued Wahab Riaz’s short ball.

Ramdin, whose 43-ball 51 included seven fours, and Simmons, who hit four boundaries and two sixes on his way to fifty, then got to work.

When Ramdin was sent back to the hutch the Windies were on a healthy 194 for four with 10.1 overs remaining, which was the cue for them to really start going for it.

Simmons kicked off the spree with two fours and a six off Haris Sohail in the 42nd over and Darren Sammy (30) offered able support before Russell got to work, hitting four sixes and three boundaries in a blistering knock.

Only New Zealand and Pakistan have successfully chased 310 or more in Christchurch and Pakistan never looked like adding to that statistic.

Taylor took two wickets in the first four balls as Nasir Jamshed and Younis Khan were dismissed without scoring, before the fast bowler added Haris Sohail for a third duck and Holder gave Ahmed Shehzad (one) his marching orders.

Russell claimed the first of his three wickets as Misbah-ul-Haq (7) left with the score at 25 for five after 10.3 overs.

Maqsood brought up his fifty with his fourth boundary in the 25th over, before leaving proceedings soon after, and Akmal stuck around until the 32nd over as their knocks boosted Pakistan to 139 for seven.

With defeat inevitable, Pakistan did their best to drag it out, but Russell and Sulieman Benn mopped up the tail, of Shahid Afridi (28), Wahab Riaz (three) and Sohail Khan (one), to secure the win as Mohammad Irfan ended on two not out.