Tennis endures a season of scandal, from match-fixing to doping 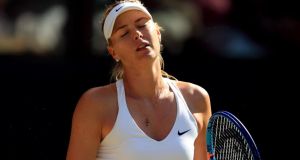 In August 2007 the world’s then number four tennis player, Russian Nikolay Davydenko, faced the journeyman Argentinian Martin Arguello (then ranked 87 in the world) in the second round of a tournament in Poland.

True to the form book, the world number four cruised through the first set 6-2 and was a break up in the second when the gambling company Betfair noticed that despite the score, millions of dollars were being wagered on the Argentinian to win the best-of-three set match.

A total of $7 million was wagered. Davydenko began hobbling and retired from the match injured early in the third set. Betfair would have to pay out on the millions wagered that Arguello would win. But for the first time in their history, Betfair refused to do so, citing suspicious “irregular betting patterns”.

Betfair then alerted the Association of Tennis Professionals (ATP), one of the sport’s governing bodies, to inform them of their suspicions. The ATP announced a full investigation of the match. Davydenko refused to hand over his mobile phone for forensic investigation until a time when investigators say the data on it was not able to be recovered; on Arguello’s mobile phone investigators found the numbers of several Italian Betfair account holders.

One year later, the ATP concluded its investigation of the match. They found “no evidence of a violation of its rules by either Mr Arguello or Mr Davydenko or anyone else associated with the match”.

Davydenko and Arguello continued to play on the tour until their natural retirement.

Richard Williams said at the time: “People were calling me ‘nigger’. One guy shouted at me “I wish it was ‘75, we’d skin you alive’.” In response, Williams gave the black power clenched fist salute.

The crowd were upset that two days previous Venus Williams had pulled out of her semi-final with Serena just 10 minutes before match time – with the crowd already in their seats. The allegation was that Richard Williams had pulled Venus out of the match to ensure Serena would be fresh for the final against Kim Clijsters.

Because of what their father said about being racially abused, Venus and Serena boycotted the sixth most important tennis tournament of the year for the following 14 years. Indian Wells is a mandatory event on the tour – meaning if a player doesn’t turn up to play, they face the threat of suspension from the game. But oddly, Venus and Serena were never sanctioned for refusing to play Indian Wells.

If the best footballer in the world refused to play in a certain ground because his father had been racially abused there, the football world would stop until the problem had been resolved to the satisfaction of all concerned. But Indian Wells continued without the world’s number one women’s tennis player.

These are the backstories as to why tennis has been in the sports and news headlines in the first three months of this year. And why the sport is now broken.

When a very real problem in the sport is made evident, it is ignored. From allegations of match-fixing and drug bans being overturned/reduced to reports of racism and a very low opinion of women.

The TIU has an annual budget of $2 million. To put that in context with regards to the money generated by the sport, Maria Sharapova was earning $23 million a year in endorsement deals alone before her failed drug test.

The report concluded the sport appeared to be more concerned with protecting the image of tennis rather than acting on what it claimed to be “irrefutable” evidence of match-fixing.

That story lost heat in early March when former world number one and the sport’s golden girl, Maria Sharapova, announced she had failed a drug test in January. By her own admission Sharapova had committed one of the worst offences possible by a professional sports person – not checking what they were taking. Yet many in the tennis world saluted Sharapova for her “honest” and “bravery”.

Sharapova did not own up to a failed drugs test. She was found to be using an illegal substance which is also a performance-enhancing drug. The tennis authorities allowed Sharapova to break the news in words of her own choosing – and get her excuses in early. The nature of Sharapova’s ban from the sport (possible: two years; probable: one year or less) will be known in a few weeks.

But Sharapova’s lawyers have a treasure chest to play with due to the past treatment of players failing drug tests. In 2013 Croatian Marin Cilic got a nine-month ban for testing positive. He was informed of this after winning his first round match at Wimbledon that year. He told the press he wouldn’t be able to play his second round match because of a “knee injury” when the truth was he was already serving a provisional suspension from the sport.

Cilic tested positive for the banned supplement Coramine after taking glucose tablets. According to the independent tribunal on the case, the tablets’ information leaflet contained a warning for athletes that they could lead to a positive test. Cilic argued he could not understand the French language on the packet.

Marin Cilic’s Wikipedia entry states that his place of residence is Monte Carlo in Monaco. Last month a video surfaced of him doing an interview in French.

The independent tribunal found that the banned supplement Coramine was in upper case letters on the front of the pack of the glucose tablets and that “it would have taken Cilic only a few minutes to search Coramine on Google and discover the danger he was in”. The tribunal found he said he had a knee injury to reporters at Wimbledon to “avoid adverse publicity”.

The following year, Marin Cilic won the US Open. It was only the second time in 39 consecutive Grand Slams since the French in 2005 that a player from outside the big four had won a Major.

If the rigour that was applied by sports journalists to the world of cycling was transferred to tennis, the sport would be in a lot more trouble than it already is.

That someone so high up the tennis hierarchy should suggest that women “get on their knees” is indicative of the mountain-top arrogance and abject stupidity at the heart of the tennis establishment.

Raymond Moore is also a reminder of tennis’s shameful history. As with rugby and cricket, tennis was a good friend to Apartheid South Africa. A white-only South African team including Raymond Moore made it to the final of the 1973 Davis Cup. Their opponents, India, refused to play against them. South Africa claimed the win.

The failure to make the sport transparently clean of drug cheating and rid it of match-fixing and its perception to the public at large as a sport for self-entitled high-income earners have done near irreparable damage to tennis.

That a gambling company has to tell you that your sport has a serious match-fixing problem is a bit like Diageo ringing to say you have a drink problem. Worse, the tennis authorities blew the most glorious opportunity presented to them to get away from their stuffy, white privileged background and actually do something about the “inclusivity” they are always banging on about in press releases.

A man from a deprived background with zero knowledge of tennis pays someone called “Old Whiskey” in pints of booze to teach him the basics of the game. With these basics, he takes his two young girls to a rundown, badly surfaced public tennis court. He teaches his girls how to play.

Richard Williams’s girls go on to win a staggering 56 Grand Slam titles between them. And Serena still has a few Slams left in her.

It’s a real-life sporting fairy tale that has never been used by the sport in its promotion of the game. It doesn’t fit with the sport’s high regard of itself. And from Indian Wells we know what some in the tennis world think of Richard Williams.

Tennis turned down its best story. And for the worst of reasons.

The sport deserves its sorry fate.