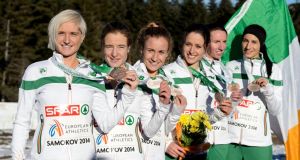 The Offaly woman captained the Irish senior women’s team to an unlikely bronze medal at the European Cross Country Championships in Bulgaria, combining with Fionnuala Britton, Sara Treacy and Michelle Finn to beat France by a point to a place on the podium.

It made them only the third Irish women’s team to medal at the championships after Sonia O’Sullivan and Catherina McKiernan helped the 2003 group to bronze, and Britton led the 2012 team to gold.

If Britton was disappointed by her sixth place finish in the individual race, the consolation was a mighty pleasant one, her finish along with Treacy’s excellent 12th giving the team their chance. Next in was Finn in 23rd, so all depended on McGlynn, the 34-year-old Letterkenny AC runner who had only returned to the sport in 2012 after taking a break for six years.

Her gutsy effort in the exhausting closing stages on a snowy, muddy course, when she made one last push to overtake a number of runners, saw her finish in 46th place – one place lower and France would have taken the bronze.

“I think I might go back into retirement,” she laughed.

The team’s two non-scoring finishers, Siobhan O’Doherty (47th) and Laura Crowe (53rd), weren’t far behind, but those top four placings were enough to secure bronze ahead of a gifted French team, and behind winners Britain and runners-up Spain.

McGlynn had been a talented runner in her school days, winning junior national titles on the track and in cross country as Ann Marie Larkin, but after retirement she only returned to running as a form of therapy as she tried to cope with the ordeal of her baby’s illness. Now Alfie is fully recovered, and his mother has a European medal.

As captain of the team, then, and as a representative of them all, McGlynn is our sportswoman of the month – but also as a salute to her own wonderful story.