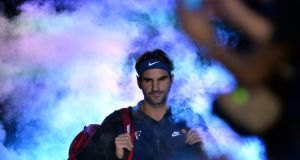 I’m always surprised,” Federer said. “I win a tournament. I walk off the court, and it’s like, ‘Where’s the doping guy?’” Photograph: Glyn Kirk/AFP/Getty Images

Tennis’ oft-questioned anti-doping programme took some new hits last month when Andy Murray called for more investment and Roger Federer called for more testing. “I’m always surprised,” Federer said at the ATP World Tour Finals in London. “I win a tournament. I walk off the court, and it’s like, ‘Where’s the doping guy?’”

When Federer arches an eyebrow and complains, it soon goes global, all the more so at a moment when Russia has been barred from international track and field by the sport’s governing body, the International Association of Athletics Federations, for operating what investigators said was essentially a state-sponsored doping programme.

“I think when you have news like you do, the IAAF and Russia, it raises alarms – as it should – and it makes us look at everything we do,” David Haggerty, the new president of the International Tennis Federation, said from London last week. “It makes us want to make sure we are the best we can be and have programmes that really have integrity, whether it’s anti-doping, anti-corruption or governance.”

The idea of a federation administering doping tests to its own athletes and meal tickets has been flawed from the start. It has never looked more untenable than in light of the allegations that Lamine Diack, president of the IAAF for 16 years, took bribes to cover up positive doping tests.

Diack has yet to be proved guilty, but whatever the verdict, there will be fallout. The IAAF, or what is left of it, is calling for outsourcing, and the World Anti-Doping Agency has been asked by the International Olympic Committee to study the possibility of assuming responsibility for all federations’ testing duties.

That is a lot easier to study than to enact. If the system becomes centralised, it will carry its own risks – who monitors the new monitor? – as well as a big price tag. But at least the inherent conflict of interest would be gone.

What Haggerty, a former tennis industry executive, wants to explore is the idea of an external watchdog that could monitor a much broader range of activities at the ITF than simply anti-doping efforts. “I think there’s a way to look at this holistically and to have a unit within your federation – your company, so to speak – along with external audit,” he said. “Because to me, I think good governance in federations is the biggest issue today we face.”

But anti-doping needs to remain a top priority, even if it may eventually be the responsibility of WADA or some other umbrella organisation. “I can see a number of challenges that would, at the very least, preclude that from becoming realistic for three to five years,” said Stuart Miller, the ITF executive who oversees the programme. “I don’t think we can sit on our hands while that process goes on.”

Despite Murray’s and Federer’s criticisms, the ITF has improved its game and its numbers significantly since 2012, adding a biological passport programme. About 600 players now have profiles, Miller said. He also said out-of-competition tests, a vital element in any anti-doping programme, would be “close to 50 per cent of the total” this year, up significantly from 15 percent in 2012.

That year, the ITF reported that it had administered just 63 out-of-competition blood tests; in 2014, the reported number was 1,139. “I think they are pretty well on track, and I think the areas they have improved in are quite significant,” David Howman, WADA’s director general, said. “I think the major thing, though, is the commitment that the top players are showing to the programme by speaking out. If you reflect back to 2009, there were a lot of the same top playerswho were complaining about the whereabouts system and a few other issues in the code that was introduced then. So there has been a 180-degree swing from the attitude of the players, which I find commendable.”

Miller took a sanguine approach to Federer’s complaint about the absence of tournament testers, a situation partly explained by the consensus in anti-doping circles that in-competition testing is unlikely to catch anyone other than the uninformed cheater.

“Firstly, it suggests to me that he’s got the expectation he is going to be tested, and that’s a good thing,” Miller said of Federer. “But as anybody knows, and in any anti-doping programme in any sport around the world, you can’t test every player in every event in every round of the competition. You pick and choose to provide a balance of detection and deterrence. In a lot of events, we test right at the end. In some other events, we go and get a larger number of players who play the first round who, once they’ve lost, might be lost to the program for a little while. We need to maintain variety. We need to maintain unpredictability.” – New York Times Service