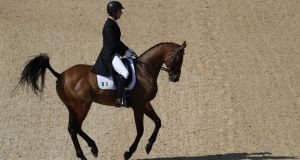 At the end of the day, this mark left Devon-based McCarthy in 12th place with the 16-year-old Polish-bred gelding which is owned by the rider, his wife Lucy and Christopher and Sarita Perkins.

Competing in the afternoon, Hillsborough’s Clare Abbott finished a place behind McCarthy when scoring 47 penalties with the Irish Sport Horse gelding Euro Prince, a 13-year-old gelding by Lougheries Quiet Man. The chestnut is owned by his breeder, Cormac McKay.

Britain’s William Fox-Pitt, who was very seriously injured in a fall in France last October and only returned to competition at the beginning of April, tops the individual standings with Chilli Morning (37 penalties). He is followed by Australia’s Chris Burton on Santano II (37.60) and Germany’s reigning individual champion Michael Jung with his London 2012 partner Sam (40.90).

The dressage phase of the eventing competition continues on Sunday when Ireland’s Jonty Evans (Cooley Rorke’s Drift) and Mark Kyle (Jemilla) compete at 2.32pm and 6.10pm Irish time. The cross-country phase takes place on Monday and the individual and team eventing medals will be decided following the final show jumping phase on Tuesday.

1 Ireland Slam England at the Gardens to open up Grand ambitions
2 ‘Manchester United are lucky to have you’: Klopp responds to Donegal schoolboy’s letter
3 Leinster get the job done against Ospreys
4 Eddie Jones: back three will deal with Irish aerial threat
5 Solskjær backs Martial to get 20 goals for Manchester United for first time
Real news has value SUBSCRIBE