France beat hosts, who seemed to have a helping hand along the way, in the final 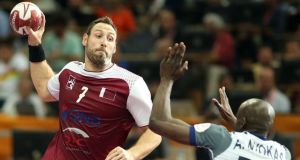 The end came for Qatar when the French man in their ranks saw an opportunity that wasn’t there. Bertrand Roiné, playing against some of his former team-mates rushed his shot and what might have a been a one-goal game was suddenly a three-goal contest, the winning margin in place and the hosts finally put in theirs.

That they had, at times, led a charmed life en route to the final, rankled with many; a team constructed almost entirely of expensive imports, was seen to be getting the hometown treatment from the officials, prompting travelling media to snort derision under their breath and across desks and vanquished semi-finalists Poland to surround and sarcastically applaud the referee after their three two-minute sin-binnings in the first half saw Qatar turn the game back in their favour.

That was Qatar’s seventh win in eight, each one worth reportedly €100,000 to the players. Even their revered world championship-winning coach Valero Rivera of Spain had to work for a handshake from his opposite number that night, as his side went into the final having incurred fewer penalties than any other, and by some distance, in most cases.

This is Qatar. As in business, it’s their country, their rules, but it is worth noting the trend was bucked in the final and in the seven other world championships this century, the hosts were finalists four times and, in another two, Tunisia and Sweden were in the last four.

This is the International Handball Federation (IHF): their game, their rules, as Australia found out to their cost in July when they were replaced in the tournament by behemoths Germany because, according to the federation, “balanced results and matches maintain and strengthen the image of the IHF and the World Championship product towards the media, international sports organisations and partners of our sport”.

Germany had been gifted a free pass into their two-legged qualifier against Poland, and lost. Australia’s chagrin must have been further exasperated when, after Bahrain and then UAE withdrew, Qatar’s neighbours Saudi Arabia, along with traditional powerhouses Iceland, were brought in. The Saudis, when finishing bottom of Group Five and conceding 165 goals, did little to “strengthen the image of the IHF”.

For IHF president Hassan Moustafa of Egypt, whose 15-year tenure has been characterised by the exponential growth of the ‘handball family’ around the world, this was clearly not one of those times to cater for the minnows of the game, unless they were strategic and regional partners to Qatar Emir, Sheikh Tamim bin Hamad Al-Thani.

None of which is to suggest Qatar’s first notable steps into hosting international sport were not a success; to these unfamiliar eyes the game’s appeal is unquestionably enhanced, its physicality, skill and pace can only truly be appreciated live. The atmosphere – though it was at times needlessly artificially force fed by shouty MCs hell-bent on Mexican waves and obsessed with naff dance-tracks, regardless of how brief the interlude – was gleefully contributed to by most of those in the stadium and even media cynics on these matters would have to admit that’s the barometer that counts.

“They are paying for the flights, lodging and full board in a good hotel, they are granting the fans access to watch the whole World Cup, ” said Samuel Ruiz president of supporters’ group Furia Conquense. “It is a good enough offer to make you cheer them on in their matches, even if they are playing against Spain. It’s all paid for by Qatar so those are the ones we have to support.”

Much like many fans would be, they were just happy to get in. It was a luxury that was not afforded to everyone as the tournament wore on. Local and visiting ticket-holders were turned away from the quarter-final win over Germany and the Poland semi-final, after it was broken to them that their seats were taken by others who had simply turned up earlier. In their eagerness for a full-house, organisers adopted an open-door policy and left many outside dissatisfied, though local message boards suggested the tactic was as organised as it appeared disorganised.

Nevertheless, as the tournament closed, Moustafa hailed it the “best ever” and the Emir at least had the good grace to look happy for France on adding a world title to their Olympic and European crowns.

Kylie brought the curtain down and as the crowd trickled out and as space emerged again the Australian must have wondered how different it might have been had her countrymen been allowed to join her. They should be so lucky.