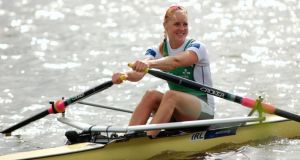 Sanita Puspure: “With 250 metres to go, I just went for it. I gave it everything I had in the last 20 strokes. If I’d only started two strokes earlier.” Photograph: Chris Carpenter/The Irish Times

She came off the water in London 2012, where she had placed 13th, determined to climb the exalted ranks of the best single scullers in the world.

Yesterday, halfway to the next Olympic Games, Sanita Puspure placed fourth at the World Championships, just one place – and 1.17 seconds – off a medal.

The A final was won by another sculler on an upwards trajectory, Emma Twigg of New Zealand, who took her first World Championship gold, ahead of Kim Crow of Australia and Duan Jingli of China, who held off Puspure by half a boat length.

The Ireland sculler been over four seconds behind her with 500 metres left.

“With 250 metres to go, I just went for it. I gave it everything I had in the last 20 strokes,” Puspure said. “If I’d only started two strokes earlier.”

The Old Collegians woman had beaten Olympic champion Mirka Knapkova in the semi-final, and yesterday she left the supposed hot property of this season, Magdalena Lobnig of Austria, behind her. Was she conscious of this? “Of course. I am picking them off one by one.”

The hugely encouraging end to the season for Irish rowing had begun earlier when Helen Hannigan (Walshe) and Monika Dukarska took fifth in the B final of the double sculls, putting Denmark behind them, and thus finished 11th overall.

If Ireland hold this position at next year’s World Championships it will guarantee a place at the Olympic Games for this boat.

This was quite an achievement, given that the crew was only put together late in the season and this was their first regatta.

On Saturday, a third Olympic-class crew, the women’s pair of Lisa Dilleen and Leonora Kennedy, finished second in their B final, meaning eighth overall.

Russia, the second slowest of the crews in the semi-finals, started well and led all the way, refusing to give way to repeated pushes from Ireland.

Again the Ireland boat was inside the top 11, the qualification mark next year for the Olympic Games in Rio.

Germany, France and Italy failed to make it through to either A or B finals.

The next step is “to get a little closer to medals”.