On Athletics: US scholarship an historic route for Ireland’s elite 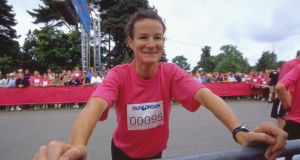 Sonia O’Sullivan was one of the many Irish athletes to accept a scholarship at a US university. Photograph: Getty.

The plan was to smash a few records and then run in the Olympics. There is no sure-fire path to any sporting glory, only the tried and trusted. And when you were a young Irish distance runner with great history on your side the only path worth following was the American scholarship.

Something about this time of year still brings it all back home. The chill of the morning run. The first hint of fall. The miles to clock and the promises to keep. Freshman orientation week feels like a lifetime ago and it is, and yet not much before or since has come close. The American scholarship didn’t so much open a path of opportunity as bulldoze it.

“We could sure use you guys at Villanova,” said George Guida, changing the course of Irish distance running history. That chapter has been told many times: how sprinter Jimmy Reardon, thrower Cummin Clancy, and miler John Joe Barry got chatting to two American athletes, Guida and Browning Ross, at the 1948 Olympics in London. Guida and Ross were both on scholarship at Villanova, and not long after leaving London, the Irish trio joined them.

Soon, the pipeline spread east to Providence and Iona, south to Arkansas and East Tennessee, north to Michigan and Notre Dame, and as far west as Pocatello, Idaho, in the heart of the Rockies. Some stayed and others followed the same path back home and yet few if any will ever admit to regretting that bulldozing opportunity it represented.

Indeed now, some 67 uninterrupted years later, that pipeline is still flowing. There were signs it was slowing down – to a worrying trickle, perhaps – when the likes of UCD and DCU presented a partially viable alternative, although that wasn’t enough to halt the flow completely. Indeed with freshman orientation week for the class of 2019 already complete, 15 young Irish distance runners have just taken up an American scholarship – the highest of the last decade. All planning to smash a few records and then run in the Olympics.

There is precious little left of that first chapter. Earlier this month, George Guida died, aged 93, his niece Annie Guida Gubeno telling me by email that he was far too modest to speak about his running achievements after Villanova. Now, of those five athletes who first chatted together at the 1948 Olympics, only Jimmy Reardon survives.

There are plenty others who did smash records and then ran in the Olympics and still found themselves largely forgotten. In 1973, Niall O’Shaughnessy was the most promising young Irish runner of his generation, unbeatable at schoolboy level, while attending St Munchin’s College in Limerick. With that he followed the scholarship path to Arkansas, where Mayo-born John McDonnell was already on his way to becoming the most successful coach in American collegiate history.

During his third year at Arkansas, aged just 20, O’Shaughnessy he became the youngest Irish runner to qualify for the Olympics (running both the 800m and 1,500m at Montreal in 1976). During his final year, aged 21, he ran a European Indoor mile record of 3:55.4, also beating the American Dick Buerkle, who held that world record. Before graduating from Arkansas he was already inspiring the next generation of Irish distance runners, particularly Frank O’Mara.

“Niall belonged to that great group of Irish middle distance runners of the 1970s,” said O’Mara, who followed O’Shaughnessy’s footsteps from Limerick to Arkansas, smashing a few records himself before running in three Olympics.

What also set O’Shaughnessy apart was his realisation that the American scholarship path could only take you so far in life. By the time he’d qualified for 1980 Olympics in Moscow, he’d also graduated with a master’s in environmental engineering, working for the State of Arkansas.

For every Niall O’Shaughnessy, or for every Ronnie Delany for that matter, there are countless other young Irish distance runners who followed the American scholarship path, and even if they never smashed a few records, or ran in the Olympics, it doesn’t mean it wasn’t worth following. They’ll always have that great history on their side, a bulldozing opportunity, and something about this time of year always brings it all back home.

1 Gerry Thornley: Wild reactions to this Ireland team as fickle as the wind
2 Dan Tuohy explains ‘rotten to the core’ comments
3 Cheltenham keeping a watching brief on coronavirus
4 Questions raised over Ireland v Italy fixture due to coronavirus
5 Cian Healy out of remainder of Six Nations
Real news has value SUBSCRIBE