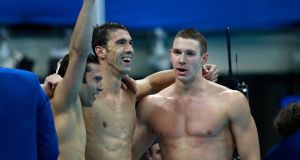 The United States had never failed to take the gold in the men’s 4x100 medley relay at a non-boycotted Summer Games, and it was not about to end the streak Saturday, not in the competitive swan song of the all-time greatest Olympian, Michael Phelps.

Backstroker Ryan Murphy and breaststroker Cody Miller set the stage for Phelps, who handed freestyle anchor Nathan Adrian a lead he refused to relinquish. The Americans won with an Olympic record time of 3:27.95 seconds, to give Phelps his 23rd gold medal and his 28th overall. If Phelps were a country, he would be tied for 38th with South Africa.

“You just have no idea how difficult it is for anybody to win an Olympic gold medal,” said Phelps’s long-time coach, Bob Bowman. “I know Michael’s done it so frequently, it’s really hard to put it in perspective.”

After 63 races spread over five Olympics and covering 11,800 meters, Phelps is finished. He entered the Rio Games as the most decorated Olympian of all time, with 22 medals, including 18 golds, and has added five golds and a silver. His other victories came in the two freestyle relays, the 200m butterfly and the 200 individual medley, where he became the third US Olympian after track and field athletes Al Oerter and Carl Lewis to win the same event four times.

Phelps announced his retirement after the London Games only to resume training in 2013. His departure this time contained an air of finality.

Bowman said he does not see Phelps changing his mind and returning to competition. “I think he’s in such a good place personally that he doesn’t need it,” he said. It is not easy for Phelps, 31, to break new ground in his career, but he managed a few notable firsts in his fifth Games: he led the US team as a captain and he carried the flag for the United States in the parade of nations. And he competed in front of his first-born son, Boomer, who snoozed in the lap of Phelps’s fiancee, Nicole Johnson.

“He always coveted wanting to be a captain,” said 50 freestyle champion Anthony Ervin, who explained why it wasn’t possible before this year.

“Being Michael requires such isolation,” he said, adding, “but this time he started reaching out to other people, bringing them closer. That was special for the entire team to see that.”

Phelps’s leadership was key on a squad replete with athletes who have no memories of an Olympics without him.

“He’s been the greatest swimmer for as long as I can remember,” said Maya DiRado, a first-time Olympian who won three individual medals, one of each hue, and added a relay gold.

DiRado said Phelps’s US team-mates watched in wonder as he got to the wall first in the 200 butterfly despite a laboured final few metres, and they marvelled at his two-second victory in the 200 IM.

“We just sat looking at each other like, how?” DiRado said with a laugh. She added, “That’s what he’s done his whole career.”

“I think Michael on a broader scale has impacted the whole Olympic movement,” the relay anchor, Adrian, said. “A lot of people, you say you’re an Olympian, the first thing they ask me is, ‘Hey, have you met Michael Phelps?’ So I think his impact on the sport has been amazing.”