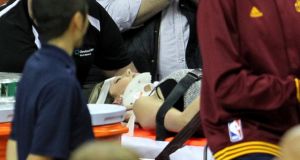 Ellie Day, wife of golfer Jason, is taken away on a stretcher after a collision with Cleveland Cavaliers star LeBron James. Photograph: AP

Cleveland Cavaliers forward LeBron James apologised to the wife of Australian golfer Jason Day after a court-side collision forced her out of the Quicken Loans Arena on a stretcher at the end of Thursday’s win over Oklahoma City.

Ellie Day was sitting front-row with her U.S. PGA Championship-winning husband when James dived for a loose ball with three minutes remaining in the 104-100 win over the Thunder.

James saved the ball from going out-of-bounds, but crashed head-first into Day, who remained on the side-line for a few minutes while receiving medical attention.

She was fitted with a brace around her neck and head while being removed from the arena on a stretcher and was taken to hospital in an ambulance accompanied by her husband.

James said he had been told her condition was sound.

“I was going for a loose ball trying to keep the possession going and I hate that was the end result of it. Obviously her health is very important.”

The clash tempered a triumphant night for James, who scored 33 points, passed for 11 assists and grabbed nine rebounds as the Cavaliers ended the Thunder’s six-game winning streak.

Center Tristan Thompson had 12 points and 15 rebounds for the Cavs, including 11 offensive rebounds.

Despite the collision with Ellie Day, James said he felt the courtside seats were “a great experience” for fans.

“Our fans are why our game is so great. Sitting courtside, it’s all part of the game. It’s pretty cool. If I was a fan, which I am a fan of the game but I would love to sit courtside and watch games.”