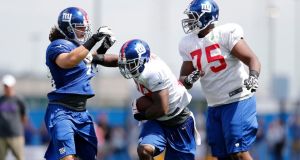 Pro football summer training camps once were filled with two practices a day, gruelling sessions that featured helmeted players clashing gladiator-style under a merciless sun. That was before the average NFL salary soared to more than $2 million, forcing coaches and owners to weigh the risk and cost of preseason injuries. At the same time, the athletic community has been changed by research outlining the cumulative, debilitating effects of recurrent head trauma, even in practice. What’s left is a training camp landscape that would have been unrecognizable 10 years ago.

As 32 NFL teams opened their camps in recent days, the new practice model virtually prohibits tackling and tolerates only nominal full-scale contact between the players, often no more than five minutes a week. At NFL training camps across the nation this week, it’s as if a bunch of touch football games have broken out. The trend against tackling and what is known in football parlance as “live contact” began about five years ago, but it has been especially pronounced this summer.

This week, after season-ending knee injuries cost the Philadelphia Eagles two of their starters, coach Chip Kelly, in his first year with the team, banned tackling for the duration of training camp. Coaches for the Carolina Panthers have issued a similar edict and have been reprimanding any player who knocks someone to the ground.

Limited live contact
Six days into their training camp, the New York Giants on Thursday were expecting to wear full pads and engage in limited live contact for the first time. “The amount of contact now is pretty minimal,” Giants co-owner John Mara said on Tuesday, standing near his team’s practice. “I would contend it’s just not necessary. So this has been a good thing.”

But if the job of defensive football players is to tackle, don’t they need to practice it? And don’t the running backs and receivers need to practice avoiding tacklers? In spring training in baseball, the batters don’t hit off a tee and the pitchers don’t throw only to catchers. Giants coach Tom Coughlin conceded there was a challenge to preparing 300-pound players for a violent game without letting teammates turn their ferocity on each other.

“In this day and age, it’s a very fine line and it is not easy,” Coughlin said. “You’ve got to get a team ready to play and they’ve got to be physical, but you can’t step over the line. It’s not worth it.” Philadelphia’s Kelly called it “a dance that everybody’s got to dance,” adding that his players would have four preseason games with unrestricted tackling. Some teams also schedule scrimmages with other teams. “They’ll get plenty of hitting in the games,” Kelly said. “But we’ve got to get our guys to the games.”

At parts of every training camp practice – sessions now conducted only once a day, as mandated by a new labour agreement – there is contact between players. Linemen knock shoulders, although not often at full speed. Wide receivers and defensive backs jostle during pass routes, and running backs sprint through narrow gaps between linemen. But almost every time a ball carrier is encountered by a defensive player, that defender will feint a tackle, but instead just tap or tag the offensive player. Infrequently, there is a shoulder lowered to deliver a glancing blow, but in the new NFL, except in sporadic cases, defenders in training camp do not use their arms to wrap up a ball carrier and drag or thrust him to the ground.

“There is just too much threat of injury to bring a guy down during practice,” said Chase Blackburn, Carolina’s middle linebacker. Much of this new model reflects the evolution of a pro football training camp that, like a lot of summer camps, is not what it used to be. Gone are days when practices were full of primal confrontations and coaches deprived players of water breaks because they believed it toughened them for the harshest conditions of the regular season.

“I remember working at training camp when the players were allowed one little cup of Gatorade per practice,” said Mara, whose father was a Giants owner and who is attending his 52nd training camp this summer. “That was my job - one cup per player - and let me tell you, it was a difficult rule to enforce. We just didn’t know better.”

The modern camp has a water brigade that trolls the grounds, hydrating the players with various liquids. Multiple athletic trainers line the fields. Every step is videotaped by camera operators hoisted in cranes so practice exercises can be analysed in evening meetings. Many players come into camp in top physical condition, and most of the drills are about technique, not brute force; rest is common; and if there is yelling from the coaches, it’s usually directed at a player who has forgotten a page in the 4-inch-thick playbook rather than a rebuke for not playing with fury.

Practice itinerary
A practice itinerary is distributed to everyone beforehand, with segments scheduled to the second. An air horn blast announces the beginning and end of each portion of practice, with packs of players trotting from station to station like worker bees. The regular-season games may still be three hours of vicious collisions, but training camp, once six weeks long, is now a three-week summer exercise in getting players prepared, as safely as possible, for the physical rigor that awaits them.

Eagles safety Nate Allen, a four-year veteran, likes it that way. He said that by the time a player reaches the NFL, he needs practice at tackling tactics, but not actual tackling. That can be reserved for games. “You just have to flip that switch,” Allen said. “And we’ve all been playing long enough to know how to do that.”

Some NFL coaches, like the New York Jets’ Rex Ryan, decide how much live contact there will be by feel; it depends how each training camp develops. On Wednesday, Ryan said he had overseen camps where tackling was prohibited throughout. Other times, he said: “You want to see the cream rise to the top. You put it out there, put the ball on the ground and say, ‘Let’s have at it.’”

As of Wednesday, the Jets had not tackled in practice. For the all the measured civility and protective deference now routine at NFL training camps, some of the fundamental instincts of the sport still emerge.

On Tuesday at Giants camp, another prohibited activity - shoving and fighting after a play is over - occurred between the 300-pound linemen Eric Herman and Marvin Austin. The scuffle was quickly broken up, but not before teammates boisterously hooted and hollered, as if recognizing that some level of aggression was inevitably going to surface under the hot sun. That notion was quickly smothered by Coughlin. “There’s no place for that,” the Giants’ coach barked. “Somebody could get hurt.”
New York Times