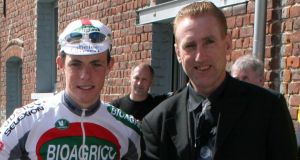 Ciaran Kelly pictured with Sean Kelly (no relation) in 2005.

Irish amateur cyclist Ciaran Kelly has been banned for four years from competition after testing positive test for Clenbuterol in April 2014. The ban also took into account the cyclist’s conduct, which the Irish Sports Council described as “deceptive” and “reckless”.

Kelly, a 27-year-old from Leixlip, was previously a promising junior rider who competed abroad and who was part of the Sean Kelly team in 2006.

After leaving the sport for a time, he returned in 2014 and dominated the time trial of the Gorey Three Day event.

However, an in-competition test carried out on him on April 20th, 2014, was red-flagged for Clenbuterol, a banned substance connected to weight loss.

Kelly accepted that he had lost 10kg in the months leading up to the event but insisted that he did not deliberately take the substance, submitting in his defence that he believed the source was contaminated meat.

He claimed he bought the meat from a local butcher. An unnamed customer of the butcher had allegedly told him the meat was imported from suppliers in Holland and Germany, and that the origin of the meat was from Argentina, New Zealand, Brazil and Spain. The World Anti-Doping Agency had previously issued warnings about possible contamination of meat with Clenbuterol in South America and China.

It said that he had submitted meat to an analysis company which was found to contain Clenbuterol.

However, it said he had failed to provide a receipt for the meat and had not satisfied the chain of custody requirement. It also said that the butcher testified to never having used the packaging the meat was wrapped in when delivered for testing and that different seals were used.

Subsequent testing by officials showed that the meat in the butchers was Irish in origin and that no traces of Clenbuterol were found.

A positive test for Clenbuterol usually carries a suspension of up to two years, but this can be reduced if the guilty party is able to show no culpability in terms of how the substance got into his system. However, the panel decided instead to double Kelly’s two-year term to four.

It said the decision was due to “the reckless manner in which the allegations were first made against the named butcher and the named supplier” in the original skeleton argument dated July 15th, 2014.

It also said it found “serious discrepancies in the athlete’s version of events” and that Kelly “engaged in deceptive conduct”.

Thirdly, it stated that Kelly’s claims had called the reputation of the entire beef industry in Ireland into question and required the Food Safety Authority of Ireland to launch an investigation which lasted five months.

The date from which Kelly’s suspension runs was set as starting from was Monday July 27th.