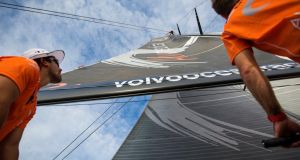 Onboard Team Alvimedica in the Volvo Ocean Race Nick Dana scales to the top of the rig to look for wind, while Mark Towill (left) and Charlie Enright (right) eagerly await an update. Abu Dhabi Ocean Racing leads on the first leg from Alicante to Cape Town. Photograph: Amory Ross/Team Alvimedica via Getty Images

Irish offshore crews only narrowly missed out on an overall win in a thrilling climax to yesterday’s Rolex Middle Sea Race in Malta. Irish sailors took second and third place in the biggest edition of the 600-mile Mediterranean fixture when huge seas and 60-knot gusts swept over the course in its closing stages.

The storm that arrived on the fourth night of racing was ferocious and lasted over 24 hours. Thankfully, Royal Malta Yacht Club say that conditions have now abated and, although there are broken boats and battered crew, they have not reported any serious injuries.

By noon yesterday 34 yachts from a record-breaking fleet of 123 had finished the race and 25 yachts – including one Irish entry – had officially retired.

After probably the toughest 24-hours in the 46-year history of the race, Lee Satariano’s Maltese J/122, Artie finished yesterday at 00h 45m 5s in an elapsed time of 4 Days 13 hours 35 mins and 05 secs to win overall but only hours prior to that, two top Irish-crewed boats were still eyeing the overall IRC prize.

Last year’s winner Otra Vez, another J-122 design, with Ireland’s top offshore sailing duo Liam Coyne and Brian Flahive onboard, were regretting the decision to head west-northwest at Sicily that cost them the overall lead.

Rumball, of the Irish National Sailing School, admits that an excellent start to the race last Saturday was spoiled by tearing an A1 sail in the initial light-wind stages. It was, however, only a temporary set back because, when the winds began to blow, the Irish crews came into their own.

The storm lasted from west of Sicily until the finish line with many reports of frightening broaches through the night.

Leading boats finished the race with storm sails only.

“Four of our crew were swept across the deck. It was lucky we were tethered. It was as bad as I had seen in the north Atlantic,” acknowledged Coyne.

“After my Round Britain and Ireland experience I couldn’t believe I was seeing the same again in the Med,” he added.

Rumball’s Xpact crew relished the heavy airs, though the Fireball dinghy champion confesses the sail wardrobe on the X-yacht is now depleted.

In the end it proved worthwhile with the Xp44 taking second overall and a win in class three.

An Irish team in a chartered Dufour 45 under Dublin skipper Cathal Drohan have retired but repeat visitor Dermot Cronin’s Encore, a First 40.7, from Malahide is still racing in class four along with a Howth Yacht Club team in the chartered Beneteau First 40 “Southern Child”.

The team is captained by Darren Wright and Colm Bermingham with sailors Kieran Jameson, Frank Dillon, Paul Walsh, Michael and David Wright, Rick De Nieve, Jonny White and Will Murray on board.

Another Howth sailor Laura Dillon is competing on the Sparkman & Stephens 41 “Winsome”.