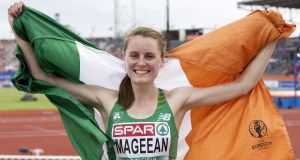 Ireland’s Ciara Mageean celebrates after winning the bronze medal in the 1500m at the European Athletics Championship in Amsterdam. Photograph: Karel Delvoije/Inpho

You know what they say about talent and the face of adversity, and Ciara Mageean is now smiling right back at it, a European Championship bronze medal marking the beginning of some just reward for an athlete once labelled as the next Sonia O’Sullivan.

Such comparisons are often futile, except now Mageean has at least followed in one of O’Sullivan’s giant footsteps by becoming only the third Irish woman to medal on the European Championship stage, the exciting thing about that being her bronze medal won over 1,500 metres in Amsterdam could so easily have been silver, or indeed gold.

Considering where she’s come from, a medal of any colour was worthy of celebration. On this same weekend, three years ago, Mageean underwent ankle reconstructive surgery, without any guarantee she would race again. No wonder she afforded herself a sort of personal lap of honour, the Irish tricolour for company.

“Is it bad that I’m a little bit disappointed?” Mageean said afterwards, the UCD student realising how close she’d come to winning a medal of another colour. “I don’t know if it’s the right thing to say right now, but if I had a clean run, in the home straight, I think it would be a different story. But I’ll have to take everybody’s advice and enjoy it.

“Still, for me, it’s a fantastic place to be, a little bit disappointed with a bronze medal, in my first senior championship proper, ever. I’m ecstatic, with a little touch of disappointment, but I think that’s testament to an athlete who wants to do even better than I have.

Truth is the way Mageean won bronze leaves little room for disappointment: it’s no good being a talent from just the shoulders down, and Mageean used her head as much as her legs when battling hard and then harder again to move into third position down the homestretch.

She finished just .02 of a second behind the defending champion Sifan Hassan, the Ethiopian-born runner now representing the Netherlands, with Poland’s Angelika Cichoka striking from the front into the homestretch to win gold.

It was classically tactical championship running too, Mageean having to fend off opponents in the final 200m after the field effectively walked the first two laps, passed in 2:46.05. At one point down the backstretch it appeared Mageean might be in danger of being swallowed, but instead she held her form, and more importantly her head.

Then, coming into the homestretch she moved into fourth, blew past Ingvill Bovin from Norway, and chased down Hassan and Cichoka. The winning time of 4:33.00 reflects the pure tactical race it was, Hassan taking second in 4:33.76, with Mageean just the width of her vest behind, clocking 4:33.78. Another stride or two and the silver medal was surely hers.

“Yeah, I could see she (Hassan) was just in front of me, but then the other girls closed in around me, and I was battling and battling trying to get past people, trying to get up on the inside. Then I had to pull myself up, and go up the back. Give me another few metres and I think I would have had her.”

Still, it was deeply satisfying run for the 24 year-old from Portaferry on the Ards Peninsula, particularly after that once chronic injury: also the fact she now joins O’Sullivan and Derval O’Rourke as the only Irish women to medal at these European Championships, first staged in 1934.

“And as a young girl just out of junior, that was testing time. I didn’t know if I’d ever get back running,” she added, when reflecting on the injury which followed her brilliant junior career. “I knew I’d always try, but it took me a year to get back racing, and two years from there I here winning a medal for Ireland. So I’m happy that I’ve put to bed the rumours that maybe I’d just be a good junior.”

She also paid tribute to her coach, Jerry Kiernan: “He told me I could win a medal, and if I didn’t win a medal it’s because I didn’t want it. I moved to Jerry right after the injury, and it was three years of Jerry taking me from walking to jogging five minutes, to winning bronze here, and I can’t thank him enough.”

Mageean now moves on to next month’s Rio Olympics with every chance of making the final, and with the sort of running she produced here, suddenly it seems nothing is impossible.

No such joy for the Irish men’s 4x400m relay team, who despite finishing an excellent fifth in their final, appear to have fallen just .07 of a second short of securing one of the 16 invitations to Rio. Their time, 3:04.32, a season best, is not quite good enough to improve on their 17th world-ranking, the deadline for Olympic qualification in the relays coming later today. There is a chance one of those top 16 nations will decline their invite to Rio, although for now, the quartet of Brian Gregan, Craig Lynch, David Gillick and Thomas Barr are left with that horrible feeling of so near and yet so far.

Earlier, Ireland was the only country with three representatives in the final of the women’s 3,000m steeplechase, with Michelle Finn seventh in a personal best of 9:43.19, with Sara Treacy ninth in 9:45.19, and Kerry O’Flaherty just another few strides back in 12th, in 9:45.88.