Hosting the Olympic Games no longer a dream for major cities

With Hamburg and Boston rejecting Olympic bids, the lure of the Games is tarnished 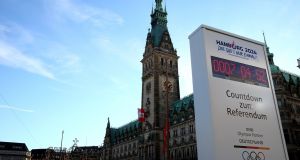 A clock in front of Hamburg town hall displays a countdown to the German city’s referendum on whether to bid to host the Olympics – last November, the citizens voted against the bid. Photograph: Martin Rose/Bongarts/Getty Images

There was a rumour going around the office this week that Dublin might be considering a late bid for the Olympics.

Not without some hope either. These are worrying times for the International Olympic Committee (IOC), and like the last items in the January sales, no reasonable offer would be refused.

Some people may need reminding that Dublin once did, in all seriousness, consider bidding before, mapping out a site in the docklands and planning a transformation of existing sporting facilities.

It was 1992, and Gay Mitchell, then lord mayor, established several working groups to help decide whether a bid was feasible: Price Waterhouse (as it was known then) declared it cost-effective and Mitchell’s conclusion – which he still stands over – was that Dublin could indeed make a credible bid.

Nor was he put off by claims from Olympic Council of Ireland president Pat Hickey that “we couldn’t even build the jacks”.

Only now, 24 years on, the burning question is not so much could we bid but should we? The IOC is still waiting on the bid documents for the next available summer Games, in 2024, with all submissions due by the February 17th deadline.

The rumour that Dublin is considering a late submission may be no more than that, although given Hickey’s now commanding role within the IOC, plus the fact our economy has gone from rags to riches again, would it be refused?

What is certain is that what used to be a frantic bidding process has turned somewhat farcical.

As things stand, only four cities are still bidding for those 2024 Olympics – Paris, Rome, Budapest and Los Angeles – and by the time the IOC make their final decision in Lima, Peru in September of next year, that race may well be further reduced.

That old five-ringed emblem has clearly lost much of its shine, and instead of cities dreaming of bidding for the Olympics it now feels like more of a nightmare.

The people of Hamburg certainly felt that way. Despite an estimated approval rate of about 60 per cent, Germany’s second largest city voted a resounding “nein” when putting their 2024 bid to a public referendum last November.

For IOC president Thomas Bach, this wasn’t only a brutal rejection by his own people, it’s also scared off any further German bids, for summer or winter Games, for a very long time.

The reasons behind that “nein” are telling: Hamburg’s anti-Olympic campaign, NOlympia, was adamant the estimated €11.2 billion cost of hosting the Games was far better spent on the needs of the population, especially given its central destination in the European migrant and refugee crisis.

Other non-sporting matters were partly to blame, including their still uncertain economy and increasing terrorist threats following the savage attacks in Paris a few weeks previous.

Yet Bach himself also conceded the decision “may have been influenced by regrettable incidents with regard to doping and corruption”.

Whatever about the exorbitant costs the Olympics place on the host city, those damning reports of corruption within the Fifa (including Germany’s bid for the 2006 World Cup) and the IAAF, and more recently of match- fixing in tennis, haven’t done the IOC’s image any favour.

A statement from the No Boston campaign in the aftermath of the Hamburg vote certainly saw it that way: “Citizens across the globe are saying loudly and clearly that they have more important priorities than throwing a three-week party for the undemocratic, unaccountable IOC.”

Indeed, Boston helped set the trend here. This time last year the US Olympic Committee declared Boston its preferred choice to bid for the 2024 Games, only for all hell to break loose. Boston’s anti-Olympic sentiment became so strong that by July their bid was unceremoniously dropped, and Los Angeles was entered instead.

Meanwhile, other potential bidders for 2024, including Toronto, also cited a fear of public rejection for not entering the race.

Indeed in the aftermath of the Hamburg vote, David Luckes, the man behind the original London 2012 feasibility study, admitted those Games would never have happened had the UK carried out a referendum on the matter, because the “no” vote would definitely have won.

Whatever happy glow was left in the faces of the IOC in the aftermath of those London Games also faded fast. Last July, they found themselves with just two candidates for the 2022 Winter Olympics, after all six European bids dropped out.

Three cities – Krakow, Munich and St Moritz/Davos – rejected their bids by public referendum; Stockholm and Oslo dropped out through a combination of public and political apathy; while Lviv, Ukraine dropped out because of war.

The ghastly €37 billion price tag of Sochi 2014 didn’t help either, and in the end, the IOC was left to choose between Beijing and Almaty, Kazakhstan. (Beijing won, even though the nearest ski resort is a two-hour drive away.)

Now, with constant reminders of the budget challenges facing Rio this summer, plus the build-up to Tokyo 2020, the race to host the 2024 Games is entering the home stretch.

Budapest isn’t quite at the finish line yet either. Earlier this week, Hungary’s supreme court blocked a proposed referendum on their 2024 bid, on the basis it’s too late to back down now.

However, opponents of the Budapest bid aren’t done yet, describing the decision as “illogical” and promising further opposition through the Budapest Electoral Board.

Of all which begs the question: if that rumour is true that Dublin might be considering a late bid for 2024, how would you vote?

1 Madigan’s primary goal is Ireland caps after switch to Ulster
2 Seán Moran: It won’t take much before cancelling All-Ireland looks like a solution
3 My sporting disappointment: Battered, bloodied, broken by The Wall
4 View from Melbourne: Sporting fabric of the city suffering from second lockdown
5 Atalanta hope to bring joy to Bergamo after city’s darkest hour
Real news has value SUBSCRIBE