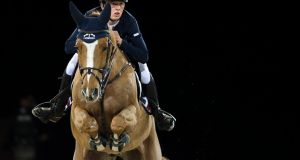 Bertram Allen looks to have qualified for the Rio Olympics. Photograph: Getty

Horse Sport Ireland is awaiting official confirmation from the Fédération Equestre Internationale (FEI) regarding participation of individual riders in show jumping and dressage at the summer Olympics in Rio de Janeiro.

The qualifying period ended on Sunday with Wexford’s Bertram Allen looking to have secured a place for the country in the show jumping competition with Molly Malone V having topped Group A (north western Europe). A second place through the individual rankings system may also have been booked by Denis Lynch.

Meanwhile, Judy Reynolds’s excellent weekend results with Vancouver K in Doha, where she set Irish international records in both the Grand Prix and Kür (freestyle to music), would seem to have the Co Kildare rider on course for Brazil.

The Co Offaly-born rider was one of just five from 50 starters to progress from round one in the 1.60m competition. Going midway in the jump-off, Kenny’s time of 42.83 seconds easily bettered those of Australia’s Matt Williams on Valinski S (45.79) and Colombia’s Roberto Teran on Woklahoma (44.89).

The USA’s Hardin Towell riding Emilie de Diamant AS had one rail down in 46.84, a time which saw him finish fifth behind Britain’s Ben Maher who also picked up four faults in 44.43 with Sarena. This was Kenny’s second win of the WEF with Red Star d’Argent, a Selle Francais gelding he owns in partnership with the 11-year-old’s former rider Sergio Alvarez Moya.

Based in Florida, Kenny was presented the Niall Grimes “Cheers” perpetual trophy, which is presented each year to the top Irish rider during the CSIO Nations’ Cup week while Red Star d’Argent’s groom, Nickki O’Donovan from Ballinspittle, was presented with the groom’s initiative award marking her dedication and hard work as an integral member of the winning team.

The Kate Nash Boone award was presented to Conor Swail as the international equestrian who exemplifies the best style of riding along with maintaining a sportsmanlike composure while competing during Nations’ Cup week. The Co Down native was a member of Ireland’s Nations’ Cup winning team on Friday evening along with Shane Sweetnam, Richie Moloney and Cian O’Connor.