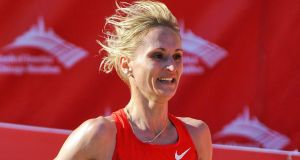 Russia’s Liliya Shobukhova: it was claimed that a Russian official extorted €450,000 from London Marathon winner in 2011 to allow her to compete at the 2012 Olympics. Photo: Tannen Maury/EPA

When Sebastian Coe launched his candidacy for the IAAF presidency on Wednesday he stressed that, while athletics needed reform, it was not in “a panic” or “a crisis”.

Just 24 four hours on, the septic claims made by the German TV channel ARD about doping in Russia – and collusion by at least one IAAF member – have regurgitated one of the oldest fears about the sport: that too many are cheating and getting away with it.

But, vitally, the documentary did not only satisfy itself with the claims – it intricately detailed the alleged connections and capillaries between Russia’s government and its anti-doping agencies, coaches and athletes. They were all blood brothers, in on the deceit.

According to the film, nothing was as it should have been. Rusada – the organisation tasked with exposing drugs cheats – was covering up positive tests in sports as diverse as swimming, athletics, cycling, biathlon, weightlifting and skiing.

There was pressure from the Russian government to forget about prominent stars who had failed tests. Athletes were told: “You must dope. That’s how it is done in Russia.”

Asked how many members of the Russian Olympic team doped, the former discus thrower Evgenia Pecherina told the German investigator Hajo Seppelt: “Most of them, the majority, 99 per cent. And you can get absolutely everything. Everything the athlete wants.”

The London 2012 Olympic 800m champion Mariya Savinova explained how she got away taking the banned anabolic agent Oxandrolone.

“Luckily, my coach works with [one of the head coaches of the Russian athletics federation, Alexey] Melnikov, and he helps to cover up the tests. They let him swap the dates for the controls.”

More staggeringly still, it was claimed that a Russian official extorted €450,000 from Liliya Shobukhova, the London Marathon winner in 2011, to allow her to compete at the 2012 Olympics. The federation had known that her blood levels from 2009 to 2011 were suspicious yet said nothing. The ARD programme also alleged that Valentin Balakhnichev – the IAAF treasurer who is the head of the Russian federation – was aware of the bribes paid by Shobukhova yet kept quiet.

The TV documentary was dismissed as “a pack of lies”, by Balakhnichev. “I can say that there are a pack of lies and it is an unfair account. I will be able to give a more accurate and fuller commentary later in the day once we have studied the situation further,” he said.

The Russian Anti-Doping Agency said there was nothing to support the allegations; the managing director, Nikita Kamaev, telling the R-Sport Agency: “They do not have the facts or the documents to support any offences.”

However, Paula Radcliffe, one of athletics’ most vocal anti-drug campaigners, admitted the documentary made her feel “sick to her stomach”, adding that “some of the allegations coming out are every sport’s worst nightmare”.

The programme also quoted an anonymous IAAF source who said: “Yes, there is at least one person within IAAF who accepts money to cover up positive tests.” It is an open secret among athletes who that person is: his going rate is said to be between $20-50,000. Meanwhile there are suspicions about other countries too, particularly Morocco and Turkey.