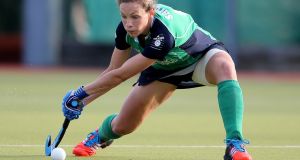 Cliodhna Sargent in action for Ireland.

When she started playing hockey as a child in Togher in Cork, Cliodhna Sargent never imagined winning a single cap for Ireland. The height of her ambition was to make the Munster underage team. Last weekend in New Zealand, though, she became just the third Irish woman (after Nikki Symmons and Shirley McCay), and the first from Munster, to win 200 caps. And the Cork Harlequins player, a PhD student in the biological sciences department in Cork Institute of Technology, is still only 28.

I am, absolutely delighted. When I was younger I never, ever thought I’d even play for the senior Irish team, I just didn’t think I’d ever be good enough. It never made me stop trying, but I just didn’t see myself making it to that level.

But you made your senior debut in 2007 and you’ve been involved ever since – that’s been a huge chunk of your life.

You could do that trip with your eyes closed?

Completely. But it’s been worth it all, especially for the friends I’ve made. When I think back, I found it difficult coming in to the squad, there was a different atmosphere then, a divide between the senior players and the younger players, but that’s completely changed. We’ve all made sure that we created a team culture, whether you’re 18 or 28, you’re just as much part of it all. All the girls were at my wedding, they’re all good friends and it’s so great going away with them now, you have such a laugh.

Definitely. But when we go away now we’re all told we’re not allowed to bring any club or interprovincial gear. But we still slag each other – they take the piss out of my Cork accent, and I do the same to them.

You’ve been through so much together over those years, lots of highs, plenty of lows, like missing out on Olympic qualification?

And the only people who know what you’re going through at times like that are your team-mates, they’re the ones who have been on the whole journey with you, all the horrendous training, the travelling, the only ones who go through the same heartache. And not qualifying this time around was the most heartbreaking of all because we came so close [Ireland were one conversion away from qualifying for Rio in a shoot-out against China last June] .

Do you come from a sporty family?

I do, I grew up on the side of a hockey pitch. My mum was involved in the game and my dad cycled at a high level, he was on the B team for Ireland at one stage. From the minute I could walk we were either kicking a ball around, or playing hurling or tennis. Camogie, tennis and hockey would have been my three main sports, but eventually I focused on hockey. But I went back playing camogie for St Finbarr’s in 2012, when we didn’t qualify for the Olympics I had the summer to twiddle my thumbs. But hockey is still the priority.

You’ve had to give up a lot along the way, the time commitment is so huge, like missing family occasions?

But I’m so lucky because everyone is so supportive – anything I need, no bother at all. If I can’t make it to something there’s never any hassle, they’re like, “we can change the date”. I’m like, “you don’t have to do that!” My brother got married a few years ago, the wedding date was nearly organised around the hockey season.

Your own wedding probably had to be too, seeing as your husband [John Hobbs, also of Cork Harlequins] is steeped in hockey too. Have you seen much of each other since you got married?

No! We managed the honeymoon alright, but then he had to go to San Francisco for work for a week or two, then I was off to New Zealand for three weeks. Everyone says we just see other in passing, so we have the perfect marriage.

A quick hello at airports?

So, what have you got from your hockey career?

It’s done a huge amount for me. Playing sport at that level gives you such determination, makes you work so hard, you’re not afraid of commitment because you know the more you commit the more you’ll get out of it. And I’ve made tons of friends over the years, which has been the real bonus.

The Offload: Roll up for rugby’s very own horror film 09:00
Ken Early on Mick McCarthy II; racing will endure even the harshest criticisms 07:19
Virtual Grand National raises €3m for NHS and Irish Red Cross 06:52
Ken Early: Mick McCarthy II was no blockbuster, more of a flop 07:00
Cheltenham controversy will pass for magnificent triviality of horse racing 08:15
Here is your handy guide to sport on television this week