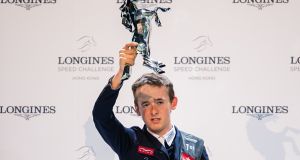 Bertram Allen, Denis Lynch and Conor Swail represent Ireland in Saturday’s opening leg of the Longines Global Champions’ Tour which gets underway at 15.15 local time at the iconic beach arena in Miami, Florida.

None of the three made it through to the second round of Friday evening’s American Invitational jump-off class but Allen did finish third with Quiet Easy 4 (62.69) in Thursday’s speed competition won by Italy’s Emanuele Gaudiano on Caspar (60.25).

This weekend, Irish senior show jumping riders are also in action in Cagnes-sur-Mer in France and at the Belgian venues of Lanaken and Lummen while a squad of younger riders is competing at Bonheiden in Belgium.

Four internationals represent the country in para-dressage at Deauville where the competition commenced yesterday with the team tests.

Ireland’s best result came at Grade 1A level where Co Wicklow’s Helen Kearney, who won individual silver and bronze and a team bronze medal at the London Paralympics, placed fourth on Rock And Roll 2.

Dressage takes centre stage at home this weekend through the national winter finals at Cavan Equestrian Centre. Saturday’s feature class is the Prix St Georges, which has attracted an entry of 12, while the focus on Sunday will be on the ride-offs in the preliminary championships.