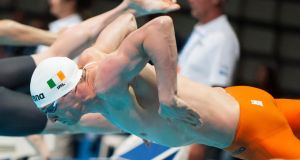 Barry Murphy has won bronze in the 50m Breaststroke at the Fina short-course World Cup in Eindhoven.

The 27-year-old Dubliner qualified third fastest this morning in a new Irish best of 26.54 seconds, and upped his game again to take third in the final in a time of 26.40.

South Africa’s Roland Schoeman was the Gold medallist in 25.86, with Fabio Scozzoli (Italy) taking Silver in 25.88.

Murphy went on to set another national record in the 50m Butterfly final when finishing seventh in a time of 23.28. Germany’s Stefan Diebler won in a time of 22.17.

Murphy will race in the 100m Breaststroke and the 50m Freestyle heats tomorrow.