Ashes: Stokes puts England on the brink of series win 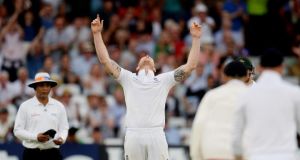 Ben Stokes did his considerable best with five wickets but England must still return after all for a third day at Trent Bridge to win back the Ashes.

Australia lost four wickets in five overs, including openers Chris Rogers (52) and David Warner (64) to Stokes, after beginning their second innings 331 runs behind in this fourth Test. But at the ground where England last lost the Ashes on home soil 14 years ago, Adam Voges ensured an innings victory would not quite come inside two days.

He steered Australia to 241 for seven at stumps, still 90 behind, so a little more graft still lies ahead before Alastair Cook’s team can contemplate the endgame of regaining the urn with a match to spare.

Rogers and Warner both made ducks as Stuart Broad dismantled Australia for 60 all out on the first morning. But for almost 24 overs at their second attempt, the two left-handed openers made a mockery of that debacle with a half-century each in a stand of 113.

Stokes (five for 35) intervened with three wickets for four runs as Australia faltered before tea. But Peter Nevill dug in alongside Voges, as he had at Edgbaston last week.

His senior partner Voges, at a venue he knows well from his time as an overseas star, continued to make himself sufficiently at home again to suggest he may be able to hold England up a little longer yet.

The hosts’ declaration came on 391 for nine shortly before lunch after which the ball continued to swing, with occasional movement off the pitch too. Yet England found their progress harder earned and did not always help themselves either, Warner dropped in the slips on 10 and 42 by Cook and then Ian Bell.

It seemed England’s luck was well and truly out when, for the first of two occasions, a batsman was given a second chance by a third-umpire no-ball call. Mark Wood found extra bounce and Rogers gloved to third slip where Joe Root clung on low down.

But the opener had only two more runs when Root took an even better catch in the same position, diving one-handed away to his left, and this time Stokes had some foot behind the line. Stokes struck with the last ball of his next over too, Warner mis-pulling a short ball for an easy catch to mid-on, and then Shaun Marsh also edged to Root.

The final wicket of the session was Broad’s but Stokes could not stay out of the action and took the low catch at cover to see off Steve Smith. Michael Clarke’s attempt to arrest his series-long slump foundered with an edge off Wood and a Cook juggle at first slip to Bell at second.

But it was not until Nevill misjudged one that nipped back into him from Stokes to go lbw shouldering arms that the sixth-wicket stand was broken on 50. Then even after Stokes had Mitchell Johnson edging to slip, worsening light precluded any consideration of the extra half-hour.

On a cloudy morning, England had consolidated their domination despite Mitchell Starc’s burst of three wickets for five runs. Starc (six for 111) took advantage of helpful conditions as the hosts stumbled from 274 for four to 332 for eight but Moeen Ali and Broad put on of 58 in just 7.3 overs for the ninth wicket.

Root began with an unbeaten 124 to his name but made only six more before edging an attempted drive at Starc behind.