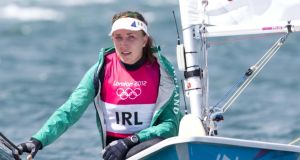 Laser Radial star Annalise Murphy is in search of Dutch gold at Delta Lloyd Regatta this morning just a fortnight after victory at Italian Olympic Week. After three days of competition in Holland the 23-year-old has two wins in seven races to be a point behind overall leader Alison Young of Britain in breezy conditions.

Murphy qualified for the gold fleet on Wednesday in style, a marked improvement on the last round of the Isaf World Cup a month ago when she failed to make the gold fleet cut in France. Since then the Dubliner won at the inaugural EUROSAF champions series on Lake Garda. Tomorrow gives the National Yacht Club sailor the chance to repeat the performance in Medemblik which would give her an impressive second series victory.

Murphy was in commanding form when the breeze touched 30-knots on the Islemeer on Wednesday but even in yesterday’s more moderate conditions Murphy kept the Olympic champion and silver medallist from London 2012 behind her.

Young, the Palma World Cup winner and the bronze medallist from Hyeres, was neck and neck with the Irish contender as race eight started in 11 knots late yesterday.

On the Solent, Murphy’s London team-mate Peter O’Leary is onboard his father’s Ker 39 when Antix makes its offshore debut in tomorrow’s Myth of Malham race. The sole Irish contender joins a fleet of 120 for the 230-mile race.

Tomorrow’s RORC fixture takes the fleet from the Royal Yacht Squadron line in Cowes, round the Eddystone lighthouse and back to the Solent.

Antix is also one of 20 entries in next month’s Dún Laoghaire to Dingle offshore on June 8th, a feeder for the following week’s 60-plus-boat ICRA National Championships in Tralee Bay. Event organisers of it, Kinsale’s Sovereign’s Cup (77 boats) and July’s Dún Laoghaire regatta (350 boats) to name but three, all report modest entry success but with this stocktake of the national fleet showing a reduction in participants is there a need to rationalise the 2014 calendar?

On the Irish Sea, with three winners in three races – Irish, Welsh & Manx – the 2013 Lynx metmasts ISORA Championships is wide open. The Isle of Man is back on the ISORA chart after an extraordinary race from Douglas to Dún Laoghaire on Monday saw the IOM-entry Polished Manx sweep the boards. The next race in the series is the Pwllheli to Wicklow Race in a fortnight.

Kia Motors Ireland has signed on as sponsor of the double-handed Flying Fifteen class, one of Dublin Bay’s most popular one design keelboats.