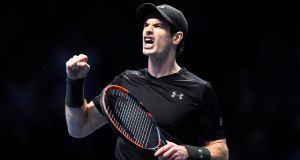 Andy Murray reacts during his men’s singles match against Kei Nishikori of Japan at the ATP World Tour Finals at the O2 Arena in London. Photograph: Will Oliver/EPA

Andy Murray was tested to the limit by Kei Nishikori but survived the longest three-set match in ATP World Tour Finals history to post a 21st consecutive win.

Murray frequently looked exhausted but dug into his seemingly-endless well of fighting spirit to win a stand-out match at an event that has been starved of such encounters.

It is the first time since the tournament moved to the O2 Arena in 2009 that Murray has won both his opening two matches and he is now in pole position to reach the semi-finals.

That could come as early as Wednesday evening if Marin Cilic defeats Stan Wawrinka.

Novak Djokovic is already through and defeat against Nishikori would have severely harmed Murray’s chances of holding onto top spot in the rankings.

The Scot, who was given another standing ovation when he walked on court, said: “I just fought really hard. Kei was making me run a lot, he was dictating a bunch of the points. I managed to get enough breaks to win it.

“That’s what you work for is these moments in places like this. It was an amazing atmosphere.

“I feel okay right now. It’s normally the next day when you feel stiff and sore but there’s hopefully three days left in the season and I’ll give my best to get through as many matches as I can.”

For all Murray’s achievements during 2016, this was the first time he had played a top-five opponent since losing to Djokovic in the French Open final in June.

Nishikori is one of only three players to beat him in the intervening five months, with the 26-year-old edging a five-set tussle in the US Open quarter-finals.

Nishikori also won their only previous meeting here two years ago and was impressive in beating an albeit lacklustre Wawrinka on Monday.

Murray was unconvincing early on in his opening match against Cilic but improved markedly and played an excellent second set.

He found himself under pressure in the early stages again here, swiping angrily at the court before saving break points in successive games.

There were some good moments from the world number one but also more errors than he would have liked.

He saved another break point at 5-5 and then created his first chance, a set point, in the next game but netted a forehand.

Murray was in big trouble when he lost successive points on serve to trail 6-3 in the tie-break but Nishikori could not take either chance on his own delivery, narrowly missing a forehand on the first.

Still the fifth seed looked certain to clinch the set when Murray left an attempted lob short but the Scot somehow scrambled to return the ball and send it past a despairing Nishikori.

The crowd roared but ultimately it counted for nothing as, on Nishikori’s fifth set point, Murray, not for the first time, sent a forehand wide.

Gael Monfils and Dominic Thiem had almost finished their three-set match by the same time on Tuesday but fighting through long matches is a Murray speciality and he found the perfect response by breaking the Nishikori serve in the opening game of the second set.

The Japanese player still had the edge off the ground, though, and it was no real surprise when he broke back to make it 4-4.

Nishikori had tortured Murray with the drop shot in New York but two ill-advised ones here allowed the top seed to take the advantage straight back.

That left him serving for the set and, after a hugely tense set of exchanges, he finally stumbled over the line.

Murray has played more matches than ever before this season and he looked drained but Nishikori’s decision-making was clouded by fatigue and he helped his opponent to another break in the third game of the decider.

When a double fault made it 4-1 to Murray, finally the top seed had some breathing space and the end was in sight.

Nishikori showed commendable resolve to retrieve one break but Murray served it out at the second time of asking.