Alex Barry finishes on top at ISA All Ireland Championships 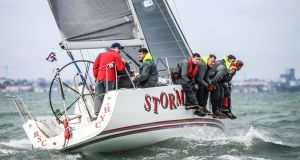 Some big names lost out early in last Sunday’s ISA All Ireland Sailing Championships and after the exit of defending champion Anthony O’Leary, even Annalise Murphy couldn’t deny RS400 ace Alex Barry the hard-fought title held in the National 18 dinghy.

Cork Harbour’s own Barry finished on top at Royal Cork Yacht Club but not before an exciting duel for the coveted trophy with Rio Olympic silver medalist Murphy who finished second overall in the eight-boat finals.

The only disappointment in the 11-boat affair, raced across the wind range, was the absence of defending champion John Maybury and his Joker II crew.

Elsewhere on a busy Bay for the first weekend of October, Royal Cork’s Lia (Dave Barry) topped the SB20 Southerns. Five wins from five races easily stole the Fireball Leinsters for Barry McCartin and Conor Kinsella. And in a strong 33-boat turnout, visiting former UK-based Flying Fifteen world champion Charles Apthorp shone at the Mitsubishi Flying Fifteen Easterns sailing with Alan Green. This three championships-in-one concept pioneered by the National Yacht Club (NYC) has been given the thumbs-up and points to the possibility of further co-operation between dinghies and sportsboat fleets in 2017.

Only three points separated the top three at the Squib Nationals in Kinsale with locals Cian and Finbarr O’Regan’s the overall winner by a single point from Royal North of Ireland’s John Driscoll and David Cagney at the Mitsubishi Flying Fifteen Easterns sailing with Alan Green.

Meanwhile, A Royal St George Yacht Club team claimed victory at an International Dragon Team Racing event in Amsterdam with race wins in the final against the Dutch and British teams from Royal Netherlands Yacht Club and Royal Thames YC.

The RstGYC’s Martin Byrne, Tim Pearson and Peter Bowring with John O’Connor, Marcus Pearson and Paul Maguire were tied with the Dutch and British teams going into the finals but a ‘photo finish’ gave the Dubliners a 1,3,6 winning score against Royal Thames to win the Cannonball trophy.

The death of Galway’s Bobby Molloy at the age of 80 this week has been felt across all the areas of his life including sailing. Best-known as an active Galway politician for 37 years, Molloy was also twice Commodore of Galway Bay Sailing Club.