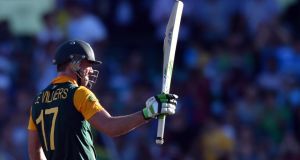 AB De Villiers hit a sensational 162 from 66 balls as South Africa stuffed the West Indies by 257 runs in their Pool B clash. Photograph: AFP

AB de Villiers confirmed his status as the most destructive batsman in cricket with a magnificent unbeaten 162 from just 66 balls to lead South Africa to a record 257-run victory over West Indies in the World Cup on Friday.

South Africa’s tally of 408 for five was the second highest posted in a World Cup match and a shell-shocked West Indies could only manage 151 in reply, Chris Gayle backing up his record 215 against Zimbabwe on Tuesday with a paltry three.

It was the joint fourth largest margin of victory by runs in an one-day international and also equalled the largest margin in a World Cup match, matching India’s 257-run win over Bermuda in 2007.

De Villiers earlier continued his one-man mission to redefine limited overs batting with the quickest century in one-day internationals on Australian soil (52 balls) and the fastest 150 ever in the 50-over format (64 balls).

Utilising his full repertoire of strokes in an awesome display of batting, he flogged the West Indies bowlers with eight sixes and 17 fours in a 104-minute knock that will live long in the memory.

South Africa were desperate to kickstart their campaign after their 130-run defeat to India in their last Pool B match and de Villiers ensured they would.

The 31-year-old shared stands of 134 runs with Rilee Rossouw (61), 48 with David Miller (20) and an unbeaten 80 in 3.2 overs with Farhaan Behardien to turn around his country’s innings after West Indies had made a promising start to the match.

West Indies captain Jason Holder, who had bowled two maidens, taken one wicket and conceded nine runs in his first five overs, ended up with figures of 1-104 after giving up 64 runs in his last two overs.

Caribbean hopes of any kind of riposte to the carnage wrought by de Villiers rested largely in the hands of Gayle, who had contributed to his side’s good start by taking two wickets in the 30th over to reduce South Africa to 146-3.

The 35-year-old opener had faced just three balls, however, when he took a huge swing at a Kyle Abbott delivery and lost his leg stump.

The West Indies soon looked like the demoralised rabble that lost their tournament opener to Ireland with only Dwayne Smith (31), Denesh Ramdin (22) and Holder (56), with his maiden ODI half century, offering more than token resistance.

Spinner Imran Tahir finished with figures of 5-45 to become the first South African to take a five-wicket haul in a World Cup match.