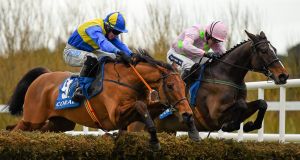 Golan Lodge, with Jack Kennedy up, left, jumps the last on their way to winning the Coral.ie Maiden Hurdle at Leopardstwon. Photo: Stephen McCarthy/Sportsfile

‘He has very little mileage on the clock,” said Ted Walsh. “He’s like a car you brought home and stood on blocks for three years.”

In that sense, then, Seabass is kind of the Ronnie O’Sullivan of the horse racing world, he doesn’t appear all that often, but when he does he makes quite an impact.

Not that he actually won the Handicap Chase at Leopardstown yesterday, but third was decent enough for a fella Ted had told us was “on his last legs”, this despite him only being 42½ in human years according to this age convertor.

Still, a heck of an engine for a middle-aged man horse.

He’s prehistoric, though, next to the chiseller that is Jack Kennedy, Ted left swooning at the 16-year-old jockey’s winning performance in a race that had a mild gambling connection, the ‘Bet & Watch’ Irish Racing Live At Coral.ie Handicap Hurdle. If he continues to develop at the same pace, said Ted, “this is definitely a man of the future – unless I’m Moby Dick”.

This prompted Ted to rant quite passionately about the Turf Club’s decision to bring in a rule that no longer allows jockeys in Irish races get back on their horses after being hit up the arse (aka removed from the saddle), a rule that leaves him in almost as much despair as Chumbawamba. You know, I get knocked down, I can’t get up again.

“He’d have been absolutely pulling straws out of his rear end if he’d been unshipped”, said Ted of Ruby, an image that will live with us for quite some time.

Coincidentally, Ronnie O’Sullivan was left clutching at straws himself, if not ones from his backside, after his Masters semi-final against world champion Stuart Bingham, the Rocket decidedly dejected when he dropped in to the BBC studio for a chat.

Steve Davis and John Parrot tried to counsel Ronnie, doing their very best to persuade him that he’d really been rather good, but he was having none of it from the old pros.

“I’m really struggling. I felt really embarrassed, I felt like I was short-changing [the fans]. Aw mate, I don’t know what’s going on, I’ve forgotten how to play,” he sighed, by which point the fella you felt most sorry for was Stuart Bingham because he’d lost 6-3 to Ronnie and must have been thinking, ‘jeez, imagine what he’d have done to me if he hadn’t forgotten how to play’.

Come yesterday, Ronnie blew Barry Hawkins in to the middle of next week, beating him 10-1 in the final, leaving BBC2 with about four hours of air time to fill and world snooker begging him not to disappear from the circuit again because without him they’ll end up on BBC4 after midnight.

Someone else who has recently disappeared is Brendan Rodgers after he and Liverpool parted company.

But he turned up again on Sky’s Goals on Sunday and, as if the day couldn’t be any more awful for the Liverpool faithful, he revealed that he almost signed Alexis Sanchez and Dele Alli, but instead got Rickie Lambert and Lazar Markovic.

Mind you, hard to blame them for wanting to monitor Brendan’s assessment of potential purchases: “The young boy Vardy will only get better and better,” said he.

Jamie’s 29. About eight in horse years. Not ancient, but as Lloyd Bentsen put it, “no Jack Kennedy”.